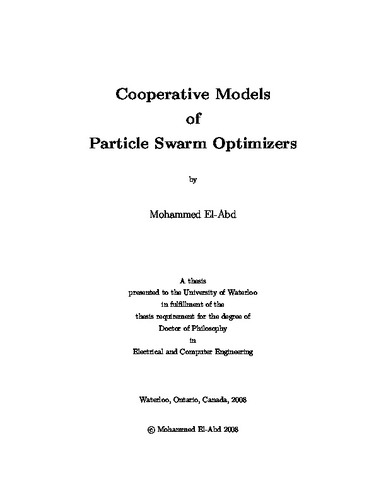 Particle Swarm Optimization (PSO) is one of the most effFective optimization tools, which emerged in the last decade. Although, the original aim was to simulate the behavior of a group of birds or a school of fish looking for food, it was quickly realized that it could be applied in optimization problems. Different directions have been taken to analyze the PSO behavior as well as improving its performance. One approach is the introduction of the concept of cooperation. This thesis focuses on studying this concept in PSO by investigating the different design decisions that influence the cooperative PSO models' performance and introducing new approaches for information exchange. Firstly, a comprehensive survey of all the cooperative PSO models proposed in the literature is compiled and a definition of what is meant by a cooperative PSO model is introduced. A taxonomy for classifying the different surveyed cooperative PSO models is given. This taxonomy classifies the cooperative models based on two different aspects: the approach the model uses for decomposing the problem search space and the method used for placing the particles into the different cooperating swarms. The taxonomy helps in gathering all the proposed models under one roof and understanding the similarities and differences between these models. Secondly, a number of parameters that control the performance of cooperative PSO models are identified. These parameters give answers to the four questions: Which information to share? When to share it? Whom to share it with? and What to do with it? A complete empirical study is conducted on one of the cooperative PSO models in order to understand how the performance changes under the influence of these parameters. Thirdly, a new heterogeneous cooperative PSO model is proposed, which is based on the exchange of probability models rather than the classical migration of particles. The model uses two swarms that combine the ideas of PSO and Estimation of Distribution Algorithms (EDAs) and is considered heterogeneous since the cooperating swarms use different approaches to sample the search space. The model is tested using different PSO models to ensure that the performance is robust against changing the underlying population topology. The experiments show that the model is able to produce better results than its components in many cases. The model also proves to be highly competitive when compared to a number of state-of-the-art cooperative PSO algorithms. Finally, two different versions of the PSO algorithm are applied in the FPGA placement problem. One version is applied entirely in the discrete domain, which is the first attempt to solve this problem in this domain using a discrete PSO (DPSO). Another version is implemented in the continuous domain. The PSO algorithms are applied to several well-known FPGA benchmark problems with increasing dimensionality. The results are compared to those obtained by the academic Versatile Place and Route (VPR) placement tool, which is based on Simulated Annealing (SA). The results show that these methods are competitive for small and medium-sized problems. For higher-sized problems, the methods provide very close results. The work also proposes the use of different cooperative PSO approaches using the two versions and their performances are compared to the single swarm performance.