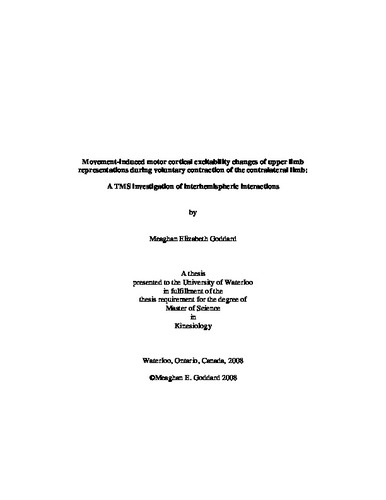 Humans possess the ability to generate an incredible degree of complex, highly skilled, and coordinated movements. Although much is known about the anatomical and physiological components of upper limb movement, the exact means by which these different areas coordinate is still far from understood. The ability to perform symmetrical, bimanual tasks with ease suggest a default coupling between mirror motor regions – a default coupling that is perceptible in unilateral movements. During intended unimanual movement in the upper limbs, bilateral changes to motor cortex output occur. The purpose of this study was to investigate the neural underpinnings of these bilateral changes and investigate the involvement of intracortical inhibitory circuits. Previous studies have shown that transcallosal connections between cortical representations of the intrinsic muscles of the hands are relatively sparser than the more proximal muscles of the upper limbs. It was hypothesized that differential responses in overall motor output or intracortical inhibition to ipsilateral muscle activation between the FDI and ECR could infer the involvement of transcallosal pathways; although interhemispheric transfer was not directly investigated in this thesis. Two studies used focal transcranial magnetic stimulation (TMS), specifically paired-pulse protocols, to investigate changes in short-interval intracortical inhibition (SICI) and long-interval intracortical inhibition (LICI) in response to contraction of contralateral homologous muscle groups to the inactive test muscle. Also, the response to activation of a non-homologous, but spatially close, muscle was investigated. Lastly, two muscle groups were investigated, a distal, intrinsic muscle of the hand (first dorsal interosseous) and a relatively more proximal muscle of the upper limb (extensor carpi radialis). These studies revealed that at low levels of force generation, unilateral isometric contractions facilitate ipsilateral mirror motor representations and reduce local GABA¬A receptor mediated inhibition. Notably, while similar facilitation occurred in both the distal and proximal effectors, decreases in SICI were much more robust in the ECR. Findings from this thesis provides insight into the neural mechanisms governing bilateral changes with unilateral movement and is important in the guiding the focus of future research.