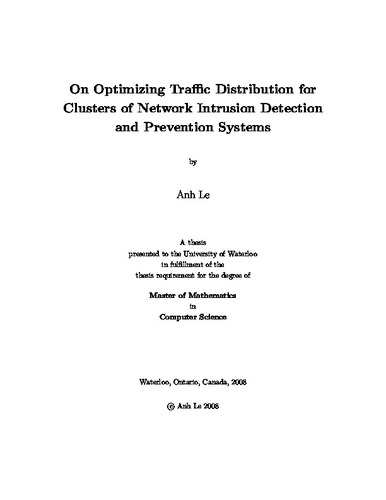 To address the overload conditions caused by the increasing network traffic volume, recent literature in the network intrusion detection and prevention field has proposed the use of clusters of network intrusion detection and prevention systems (NIDPSs). We observe that simple traffic distribution schemes are usually used for NIDPS clusters. These schemes have two major drawbacks: (1) the loss of correlation information caused by the traffic distribution because correlated flows are not sent to the same NIDPS and (2) the unbalanced loads of the NIDPSs. The first drawback severely affects the ability to detect intrusions that require analysis of correlated flows. The second drawback greatly increases the chance of overloading an NIDPS even when loads of the others are low. In this thesis, we address these two drawbacks. In particular, we propose two novel traffic distribution systems: the Correlation-Based Load Balancer and the Correlation-Based Load Manager as two different solutions to the NIDPS traffic distribution problem. On the one hand, the Load Balancer and the Load Manager both consider the current loads of the NIDPSs while distributing traffic to provide fine-grained load balancing and dynamic load distribution, respectively. On the other hand, both systems take into account traffic correlation in their distributions, thereby significantly reducing the loss of correlation information during their distribution of traffic. We have implemented prototypes of both systems and evaluated them using extensive simulations and real traffic traces. Overall, the evaluation results show that both systems have low overhead in terms of the delays introduced to the packets. More importantly, compared to the naive hash-based distribution, the Load Balancer significantly improves the anomaly-based detection accuracy of DDoS attacks and port scans -- the two major attacks that require the analysis of correlated flows -- meanwhile, the Load Manager successfully maintains the anomaly-based detection accuracy of these two major attacks of the NIDPSs.