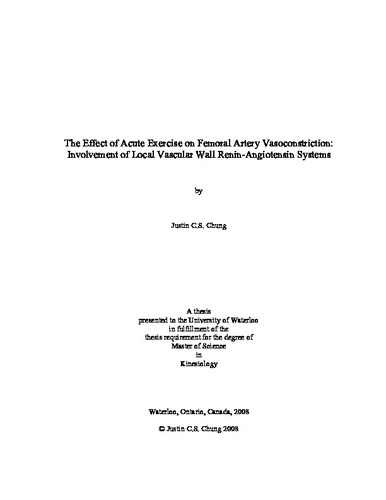 During a single bout of aerobic exercise, blood flow is shunted to exercising tissues while blood flow is maintained or reduced to less metabolically active areas (i.e. splanchnic area and non-working muscles). Although increased sympathetic activation and multiple metabolic factors participate in redistributing blood flow during aerobic exercise, the precise mechanism is not entirely known. The renin-angiotensin system (RAS), specifically the local vascular wall RAS, has been hypothesized to participate in the redistribution of blood flow during exercise. This study aimed to investigate whether vascular wall RAS in the femoral arteries (an artery which feeds active tissues during exercise) was altered by acute exercise, and if these vascular RAS alterations led to specific changes in vasomotor function. Male Sprague Dawley rats were exercised on a motorized treadmill for 1h at 21m/min with 15% grade. Immediately following exercise femoral arteries were excised, cleaned of surrounding connective tissue, and vascular RAS was evaluated. There was a decrease in femoral ACE activity (~40%) and expression (~20%) following a single bout of exercise. No change was observed in AT1 and AT2 receptor expression. To evaluate the effect of acute exercise and vascular RAS on vessel reactivity, vasomotor properties of the femoral arteries were assessed via vasoconstrictor and vasodilatory dose-response curves. No changes were observed in femoral artery responses to potassium chloride (KCl), signifying that electromechanical coupling was not affected by exercise or RAS pharmacological interventions. However, a significant decrease in maximum phenylephrine (PE) constriction was observed for acutely exercise animals (~13%). Paired with the observed maintenance KCl-mediated constriction, it appears an acute bout of exercise is able to attenuate α-adrenergic receptor-mediated vasoconstriction in the femoral artery. The decrease in maximum α-adrenergic vasoconstriction may be attributed to vascular RAS. The decrease in ACE activity supports the production of local vasodilating factors. Blocking AT1 receptors with telmisartan decreased PE constriction in control and exercised animals. Combining AT1 and AT2 receptor blockade (with PD123319) eliminated the attenuating effect of telmisartan alone on PE constriction. This data suggests that the attenuating effect of AT1 receptor blockade, on PE constriction, may depend on AT2 receptor activation. In addition, combined AT1 receptor blockade and nitric oxide synthase inhibition eliminated both the lone AT1 receptor blockade effect and exercise effect on PE constriction. Together, this data suggests that reduced PE constriction following acute exercise, and AT1 receptor blockade, is dependent on nitric oxide production. Vasodilation to the nitric oxide donor sodium nitroprusside (SNP) was not altered following exercise or RAS pharmacological intervention, signifying no change in signaling downstream of NO production/release. Endothelium-dependent vasodilation to acetylcholine (ACh) was not affected by acute exercise. However, responses to ACh were modulated by RAS pharmacological interventions supporting the responses seen in PE constriction and signifying the participation of vascular RAS in vasomotor function.