Substrate Specificity and Structure-Function Analysis of Bacterial Glyoxalase I Enzymes 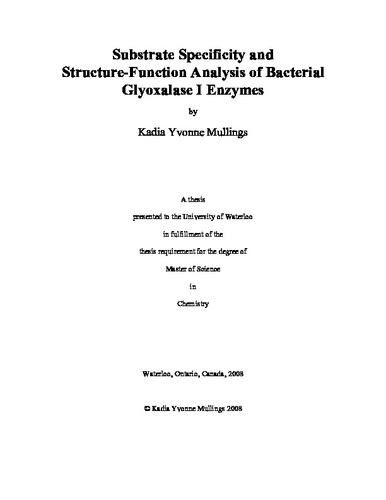 The glyoxalase pathway is widespread in both prokaryotic and eukaryotic organisms. This system utilizes two enzymes (glyoxalase I (GlxI) and glyoxalase II (GlxII)) to catalyze the formation of D-lactate from the substrates glutathione (GSH) and methylglyoxal (MG). The latter chemical is a harmful byproduct of glycolysis. This thesis gives detailed studies of the behavior of the GlxI enzyme as it pertains to its thiol co-substrate specificity, its structural similarity among its superfamily members (most particularly with the fosfomycin resistance protein (FosA)) and residue identification that would alter its metal selectivity. The thiol co-substrate GSH was thought to be the only thiol utilizied by the glyoxalase system. However, reports identified organisms that utilized the thiols trypanothione (T(SH)2) and glutahionylspermidine (GspdSH) as co-substrates. These organisms, known as the trypanosomes, are very well known in tropical environments to cause diseases. E. coli does not contain T(SH)2 but does contain GspdSH and manufactures the latter in increasing amounts under conditions of cell duress. Substrate specificity studies were conducted replacing GSH with GspdSH and T(SH)2. In addition to this, to ensure the thiols reacted in a true glyoxalase system, substrate specificity studies were also conducted on the second enzyme GlxII and verification of the product D-lactate was performed. To continue, structurally, the enzyme GlxI belongs to the βαβββ superfamily of proteins that are known to have very similar structure but to catalyze very different reactions. Comparing the active site of E. coli GlxI and FosA, there is one significant difference at one residue. Therefore an E56A mutation was performed on GlxI and the mutant bacterium were subjected to growth analysis in the presence of fosfomycin and MG. The mutant enzyme was also tested for its performance in the presence of MG and various divalent metals. Further, the Glx I enzyme from E. coli is known to be active in the presence of non-zinc bivalent metals, while the human counterpart is active in the presence of Zn2+. When one compares GlxI from E. coli with the human GlxI, there are many differences in the primary structure that could be viable areas that determine the metal specificity of the enzyme. Mutation analysis was performed on these areas to determine catalytic performance as well as metal specificity. These studies display how versatile the glyoxalase system is with regard to the use of its thiol co-substrates. These thiols participate in the detoxification pathway for MG in the cell especially under late log phase conditions. Structural studies can give some knowledge concerning the possible evolution of the enzyme among its family members, and is of monumental significance to the scientific community as it relates to enzyme metal selectivity and the development of enzymes over time.