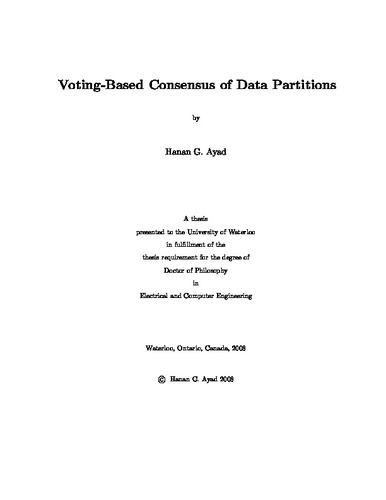 Over the past few years, there has been a renewed interest in the consensus problem for ensembles of partitions. Recent work is primarily motivated by the developments in the area of combining multiple supervised learners. Unlike the consensus of supervised classifications, the consensus of data partitions is a challenging problem due to the lack of globally defined cluster labels and to the inherent difficulty of data clustering as an unsupervised learning problem. Moreover, the true number of clusters may be unknown. A fundamental goal of consensus methods for partitions is to obtain an optimal summary of an ensemble and to discover a cluster structure with accuracy and robustness exceeding those of the individual ensemble partitions. The quality of the consensus partitions highly depends on the ensemble generation mechanism and on the suitability of the consensus method for combining the generated ensemble. Typically, consensus methods derive an ensemble representation that is used as the basis for extracting the consensus partition. Most ensemble representations circumvent the labeling problem. On the other hand, voting-based methods establish direct parallels with consensus methods for supervised classifications, by seeking an optimal relabeling of the ensemble partitions and deriving an ensemble representation consisting of a central aggregated partition. An important element of the voting-based aggregation problem is the pairwise relabeling of an ensemble partition with respect to a representative partition of the ensemble, which is refered to here as the voting problem. The voting problem is commonly formulated as a weighted bipartite matching problem. In this dissertation, a general theoretical framework for the voting problem as a multi-response regression problem is proposed. The problem is formulated as seeking to estimate the uncertainties associated with the assignments of the objects to the representative clusters, given their assignments to the clusters of an ensemble partition. A new voting scheme, referred to as cumulative voting, is derived as a special instance of the proposed regression formulation corresponding to fitting a linear model by least squares estimation. The proposed formulation reveals the close relationships between the underlying loss functions of the cumulative voting and bipartite matching schemes. A useful feature of the proposed framework is that it can be applied to model substantial variability between partitions, such as a variable number of clusters. A general aggregation algorithm with variants corresponding to cumulative voting and bipartite matching is applied and a simulation-based analysis is presented to compare the suitability of each scheme to different ensemble generation mechanisms. The bipartite matching is found to be more suitable than cumulative voting for a particular generation model, whereby each ensemble partition is generated as a noisy permutation of an underlying labeling, according to a probability of error. For ensembles with a variable number of clusters, it is proposed that the aggregated partition be viewed as an estimated distributional representation of the ensemble, on the basis of which, a criterion may be defined to seek an optimally compressed consensus partition. The properties and features of the proposed cumulative voting scheme are studied. In particular, the relationship between cumulative voting and the well-known co-association matrix is highlighted. Furthermore, an adaptive aggregation algorithm that is suited for the cumulative voting scheme is proposed. The algorithm aims at selecting the initial reference partition and the aggregation sequence of the ensemble partitions the loss of mutual information associated with the aggregated partition is minimized. In order to subsequently extract the final consensus partition, an efficient agglomerative algorithm is developed. The algorithm merges the aggregated clusters such that the maximum amount of information is preserved. Furthermore, it allows the optimal number of consensus clusters to be estimated. An empirical study using several artificial and real-world datasets demonstrates that the proposed cumulative voting scheme leads to discovering substantially more accurate consensus partitions compared to bipartite matching, in the case of ensembles with a relatively large or a variable number of clusters. Compared to other recent consensus methods, the proposed method is found to be comparable with or better than the best performing methods. Moreover, accurate estimates of the true number of clusters are often achieved using cumulative voting, whereas consistently poor estimates are achieved based on bipartite matching. The empirical evidence demonstrates that the bipartite matching scheme is not suitable for these types of ensembles.