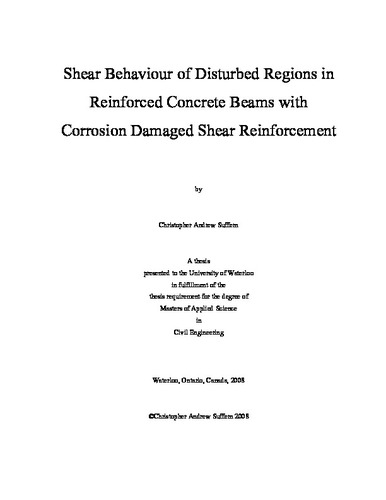 Corrosion of reinforcing steel is a major problem facing infrastructures owners with billions of dollars spent in repairing our aging infrastructure. One of the first steps in the repair process is to quantify the strength degradation in a reinforced concrete element caused by the corrosion of reinforcing steel. An understanding of the forces involved in the load carrying mechanisms is imperative; the transfer of shear forces in reinforced concrete beams is one of these load carrying mechanisms. The shear transfer mechanism is different near the end of beams, adjacent to point loads, and near changes in cross section. These regions are known as disturbed regions. Structural engineers have a good understanding of the shear transfer mechanism in disturbed regions. However, the effects of corroded shear reinforcement in these regions have not been widely investigated. The current study is comprised of an experimental program and analytical strut and tie modeling aimed at quantifying the strength reduction that occurs in disturbed regions of reinforced concrete beams with corroded shear reinforcement. The feasibility of strengthening a beam with dry lay-up carbon fibre reinforced polymer (CFRP) to repair the damage caused by corrosion of the shear reinforcement was also investigated. In the experimental study, a total of 16 reinforced concrete beams were cast. The specimens were 350 mm deep, 125 mm wide and 1850 mm long. Three shear-span to depth ratios (1.0, 1.5, 2.0) were selected. Each specimen was reinforced in flexure with two 25M bars and the shear reinforcement was 10M spaced at 150 mm on centre. The specimens were corroded for 21 days, 60 days, and 120 days corresponding to low, medium, and high corrosion levels. In addition, three specimens were constructed without shear reinforcement in the shear-span in order to compare the results from the corroded specimens. One specimen was also corroded to a high level and repaired with dry lay-up CFRP. The specimens were corroded using an accelerated corrosion technique. There was evidence of cracking of the cover concrete in all specimens, and in the more severely corroded specimens delamination of the cover concrete was recorded. The stiffness of the corroded specimens was less than their corresponding control specimen, and a strength reduction was evident in most specimens. The maximum recorded strength reduction was 52% compared to the companion uncorroded specimen. It was revealed that a more critical case occurs when the corroded shear reinforcement was shifted during placement or was inclined closer to the direction of the compressive force flow. Also, it was observed that the corroded shear reinforcement still provides limited ductility in comparison to the un-corroded reinforcement. A strut and tie model was developed based on the experiments to explain the behaviour of disturbed regions with corroded shear reinforcement. The model consisted of direct and indirect struts. The effects of corrosion were expressed in terms of a reduction in the stirrup cross-section, a reduction of compressive strength due to corrosion cracking, and a reduction in the concrete cross section width. It was hypothesized that the corrosion crack width influences the concrete compressive strength in the strut; consequently, a mathematical model was developed that related the reduction in concrete compressive strength with corrosion crack width. Also, a relationship between reinforcing steel mass loss and corrosion crack width was utilized from the published literature. An effective cross section width was obtained by reducing the width by the damaged concrete cover. The results from these models were input into a strut and tie model as a reduction in concrete compressive strength. The output from the strut and tie model was the ultimate shear strength of the specimen. The developed models were compared with a model from the literature and compared with the experimental results. The major contribution of this research is to allow designers to analyze disturbed regions with corroded shear reinforcement and determine the strength degradation; subsequently, one can determine what strengthening procedure would be most appropriate.