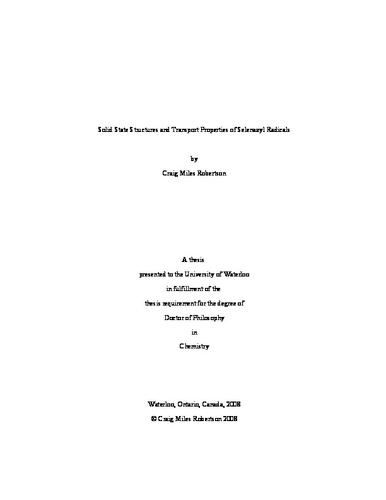 The synthetic routes to the salts of the 3H-naphtho[1,2-d][1,2,3]dithiazolylium cation and its three selenium containing variants are described. The most efficient approach involves the condensation of bis-acetylated aminoselenolates and aminothiolates with sulfur and selenium halides. Cyclic voltammetry experiments illustrate that the four cations can be reduced to their neutral radical state and are stable in solution. The EPR spectra of all four radicals have been recorded and the spin distributions have been compared with those obtained from DFT calculations. It has been found that the selenium containing radicals are thermally unstable at room temperature, but the all sulfur species has been isolated and characterized by X-ray crystallography. In the solid state, the radicals associate into cofacial dimers and short interdimer S---Sʹ, S---Nʹ and C---Hʹ contacts are observed. The all-selenium species has been characterized in its oxidized state by X-ray crystallography. A series of four challenging crystallographic projects are presented. (1) 8-Phenyl-4-methyl-4H-bis[1,2,3]thiaselenazolo[4,5-b:5ʹ,4ʹ-e]pyridinyl has been prepared and its solid-state structure determined by powder X-ray diffraction methods. The radical crystallizes in the space group P3121 and is isostructural with its ethylated derivative and its all-sulfur containing analogue. Variable-temperature magnetic measurements confirm that the radical is an undimerized S = ½ system with weak intermolecular antiferromagnetic coupling. Pressed pellet variable-temperature electrical conductivity measurements provide a room-temperature conductivity (σRT) of 3.3 ×10-5 S cm-1 and an activation energy (Eact) of 0.29 eV. The results of Extended Hückel Theory (EHT) band structure calculations are presented. (2) Single-crystal and powder X-ray diffraction methods on a family of selenium-containing radicals based the 4-methyl-3H,4H-bis[1,2,3]dithiazolo[4,5-b:5ʹ,4ʹ-e]pyridin-3-yl radical are presented. All three radicals (SSN, SSeN and SeSeN) are isostructural, crystallizing in the space group P212121, and form slipped π-stacks of undimerized radicals with close E---Eʹ contacts. Pressed pellet variable-temperature electrical conductivity measurements of the systems provide σRT = 3 × 10-4 and 1 × 10-3 S cm-1 and Eact of 0.24 eV and 0.17 eV for the SSeN and SeSeN radicals respectively. (3) The crystal structures of 4-methyl-4H-bis[1,2,3]dithiazolo[4,5-b:5ʹ,4ʹ-e]pyrazin-3-yl at 298 K, 123 K and 88 K are presented. At 298 K the radicals remain undimerized, crystallizing in the space group Cmca and forming evenly-spaced π stacks. Upon cooling to 123 K the space group symmetry is lowered by loss of C-centering to Pccn such that the radicals are not evenly spaced within the π-stack. At 88 K a further lowering of space group symmetry to P21/c is observed. (4) [1,3,2]Dithiazolo[4,5-b]pyridin-2-yl is polymorphic, crystallizing in P21 and P21/n. A non-merohedral twin law is required to model the P21 system. The structures of both crystals are comprised of layers of head-to-head π dimers and the two structures differ in the orientation of the π dimers along the stacks. Variable-temperature magnetic data reveal that both phases are essentially diamagnetic at low temperatures and form weak π dimers at higher temperatures. Synthetic methods have been developed to generate the complete series of resonance stabilized heterocyclic thia/selenazyl radicals based on 8-chloro-4-ethyl-4H-bis[1,2,3]dithiazolo[4,5-b:5ʹ,4ʹ-e]pyridin-3-yl. X-ray crystallographic studies confirm that all four radicals are isostructural, belonging to the tetragonal space group P21m. The crystal structures consist of slipped π-stack arrays of undimerized radicals. Variable temperature conductivity measurements reveal an increase in conductivity with increasing selenium content, with σRT reaching a maximum of 3.0 × 10-4 S cm-1 with an Eact of 0.19 eV for the all-selenium containing variant. Variable temperature magnetic susceptibility measurements indicate that all four radicals exhibit S = ½ Curie-Weiss behaviour over the temperature range 20 - 300 K. At lower temperatures, the three selenium-based radicals display magnetic ordering. The first radical with selenium positioned at the E1 site, undergoes a phase transition at 14 K to a weakly spin-canted (φ = 0.010̊) antiferromagnetic state. By contrast, the radical containing the apical selenium and the all-selenium variant, which both possess selenium in the E2 position, order ferromagnetically, with Curie temperatures (Tc) = 12.8 K and 17.0 K respectively and coercive fields Hc at 2 K of 250 Oe and 1370 Oe respectively. The transport properties of the entire series of radicals are discussed in the light of EHT band-structure calculations. A series of bis-thiaselenazolyl radicals (R2BPTSR1) based on the bis-[1,2,3]-thiaselenazolo[4,5-b:5',4'-e]pyridin-3-yl (R1 = Et, Pr and CF3CH2, R2 = Cl; R1 = Et, R2 = Me and Br) have been prepared and characterized by X-ray crystallography. The radicals are formally isostructural, all belonging to the tetragonal space group P21m. The crystal structures consist of slipped π-stack arrays of undimerized radicals packed about centers. Variations in R1 (Et, Pr, CF3CH2) with R2 = Cl lead to significant changes in the degree of slippage of the π-stacks and hence the proximity of the Se---Seʹ contacts. By contrast, variations in R2 (Cl, Br, Me) with R1 = Et induce very little change in either the slippage angle or the Se---Seʹ contacts. Variable temperature conductivity measurements show relatively constant values for σRT (10-5 - 10-4 S cm-1) and Eact (0.27 - 0.31 eV) across the entire series. Variable temperature magnetic susceptibility measurements indicate major differences in the magnetic behaviour. Radicals with R1 = Pr, CH2CF3, R2 = Cl behave as weakly antiferromagnetically coupled Curie-Weiss paramagnets, but radicals with R1 = Et; R2 = Cl, Me, Br demonstrate ferromagnetic ordering, with Tc values of 12.8 K (R2 = Cl), 13.6 K (R2 = Me), and 14.1 K (R2 = Br).