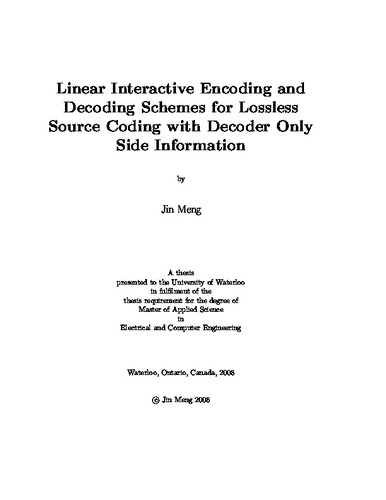 Near lossless source coding with side information only at the decoder, was first considered by Slepian and Wolf in 1970s, and rediscovered recently due to applications such as sensor network and distributed video coding. Suppose X is a source and Y is the side information. The coding scheme proposed by Slepian and Wolf, called SW coding, in which information only flows from the encoder to the decoder, was shown to achieve the rate H(X|Y) asymptotically for stationary ergodic source pairs, but not for non-ergodic case, shown by Yang and He. Recently, a new source coding paradigm called interactive encoding and decoding(IED) was proposed for near lossless coding with side information only at the decoder, where information flows in both ways, from the encoder to the decoder and vice verse. The results by Yang and He show that IED schemes are much more appealing than SW coding schemes to applications where the interaction between the encoder and the decoder is possible. However, the IED schemes proposed by Yang and He do not have an intrinsic structure that is amenable to design and implement in practice. Towards practical design, we restrict the encoding method to linear block codes, resulting in linear IED schemes. It is then shown that this restriction will not undermine the asymptotical performance of IED. Another step of practical design of IED schemes is to make the computational complexity incurred by encoding and decoding feasible. In the framework of linear IED, a scheme can be conveniently described by parity check matrices. Then we get an interesting trade-off between the density of the associated parity check matrices and the resulting symbol error probability. To implement the idea of linear IED and follow the instinct provided by the result above, Low Density Parity Check(LDPC) codes and Belief Propagation(BP) decoding are utilized. A successive LDPC code is proposed, and a new BP decoding algorithm is proposed, which applies to the case where the correlation between $Y$ and $X$ can be modeled as a finite state channel. Finally, simulation results show that linear IED schemes are indeed superior to SW coding schemes.