Isaak Babel's Image of the Humanized Jew in the Odesskie rasskazy 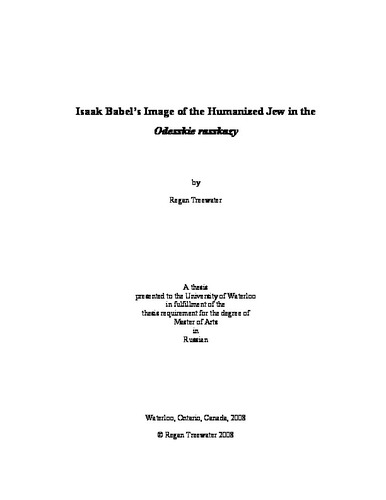 Abstract The Russia in which Isaak Babel (1894-1940) wrote was one of deep seated anti-Semitic philosophies and prejudices, a place of pogroms and segregation. Literature of this era painted the Jew as a villainous, dishonest, and feeble minded foreign being within society. Traditionally, Russian literature used the Jew as a national scapegoat or a comical stock character ripe for ridicule. Babel’s contemporaries considered him to be a born writer with a gift for minimalism without the sacrifice of vivid description. His was an evocative style of brutal humanism, showing both character flaws and character virtues. The Odesskie rasskazy (Odessa Tales) epitomized this honest approach to human portrayal. The Jewish community of the Odesskie rasskazy boasted a variety of characters from all walks of life, rejecting the previously perpetuated stereotype. The Jew, as shown by Pushkin, Turgenev, Dostoyevsky, Gogol, and Chekhov, was simply a caricature. Such characters were restricted to the role of the fool, the thief, and the opportunist. When Babel first described the community, people, and culture of his native shtetl, the previous stereotype of the Russian Jew became an antiquated relic of the past. This thesis will explore some examples of earlier depiction of Jews in literature and the humanized image of Russian Jewry that Babel created in his Odesskie rasskazy. The analysis will discuss how these depictions created a new, three dimensional characterization of the Jew.