The Role of Working Memory in Deductive Reasoning: A Dual Task and Individual Differences Approach 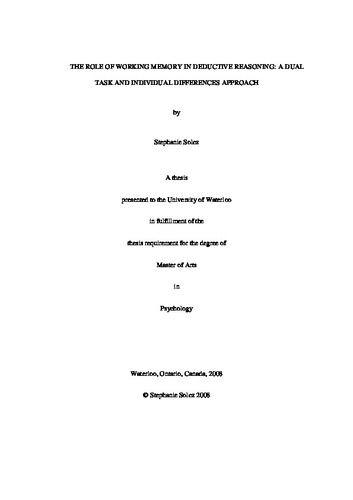 The ‘belief bias’ effect is one of the most pervasive findings in the study of syllogistic reasoning. Here, participants respond “valid” to more believable than unbelievable conclusions, regardless of the actual validity of the conclusion. There is also an interaction characteristic of the belief bias effect, in that conclusion believability plays a greater role when conclusions are invalid than when they are valid. The experiments reported in this thesis had two goals: first, to determine how individual differences in working memory (WM) capacity influence belief bias in reasoning; and second, to indentify which WM systems are involved in syllogistic deductive reasoning. To this end, both experiments employed a dual task paradigm. In Experiment 1, participants remembered spatial arrays whilst reasoning through syllogisms in order to load the visuospatial sketchpad. Results demonstrated that performance on the secondary spatial memory task suffered when participants reasoned through syllogisms of which the validity and believability of conclusions were incongruent (i.e., “conflict” problems), indicating that reasoning through conflict problems utilized limited visuospatial WM resources. Also, only participants with high WM capacities showed the typical belief-bias effect, with greater effects of conclusion believability on invalid than on valid conclusions. This interaction was not present for low WM span participants, because they made greater errors on problems with invalid, unbelievable conclusions. In Experiment 2, participants remembered digit sequences whilst reasoning in order to load the phonological loop. Both of the major results from Experiment 1 were replicated. Accuracy on the secondary digit recall task was impaired when participants reasoned through conflict problems, demonstrating that limited verbal WM resources were directed toward reasoning. Again, only high WM span participant showed the interaction between conclusion validity and believability characteristic of the belief bias effect. Effects were additive for low WM span participants because they made more errors on invalid, unbelievable syllogisms. Results from both experiments demonstrate first, that both visuospatial and verbal WM resources are involved in syllogistic reasoning, and second, that individuals with different amounts of available WM resources demonstrate differential belief bias. These results are discussed in terms of the mental models and mental logic theories of reasoning and in terms of dual process accounts of reasoning.