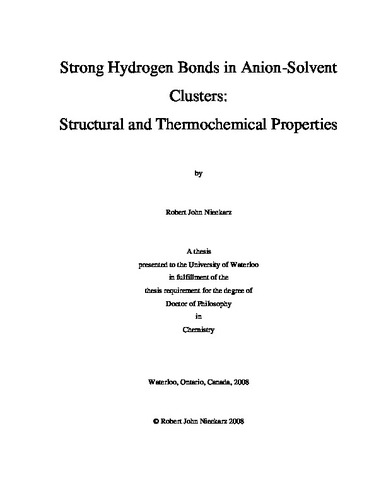 Insight into the effect of secondary interactions, fluorination, as well as substituent effects on strong ionic hydrogen bonds has been acquired through studies of FHF-, NFnH3-n•••F- (n = 0..2) and [M-H]- (M = Glycine, Alanine, Valine, Serine) clustered with ROH (R = H, CH3, C2H5). Excellent agreement was observed between thermochemical values obtained from high pressure mass spectrometry measurements and those predicted from MP2(full)/6-311++G(d,p)//B3LYP/6-311++G(d,p) calculations. In the examination of the clustering of FHF-, a strong correlation between the hydrogen bond strength and the gas phase acidity of the solvent was observed. In addition, several interesting observations on various structural and thermochemical properties were made for each of the three solvents. Upon formation of clusters with water, it was found that the large entropic advantage of one particular structure, which was not the most enthalpically favored, was significant enough to make it the predominant species within the ion source. In the case of methanol solvation, no evidence of secondary interaction of the methyl group and any other moiety could be found. The structural details revealed from calculations of the ethanol-solvated clusters indicate that secondary interactions between the terminal methyl group and FHF- had an impact on the length of both the FHF and OHF bonds present. In an attempt to gain insight into the effects of fluorination on hydrogen bonding, clusters of NFnH3-n (n = 0..2) and F- have been computationally investigated. The hydrogen bond energy in NH3∙∙∙F-, NFH2∙∙∙F- and NF2H∙∙∙F- were calculated to be -67.9 kJ∙mol-1, -120.2 kJ∙mol-1 and -181.2 kJ∙mol-1, respectively, and clearly show the effect of fluorination on hydrogen bond strength in amine-fluoride systems. The change in enthalpy and entropy for the clustering of methanol to NF2H∙∙∙F- to form the fluoride bound dimer of methanol and difluoramine has been measured via high pressure mass spectrometry to be -68.3 kJ∙mol-1 and -90.5 J∙K-1∙mol-1. These values are in excellent agreement with the calculated analogues, -70.9 kJ∙mol-1 and -88.5 J∙K-1∙mol-1. Finally, an examination of the thermochemical properties associated with the formation of a hydrogen bond linkage between protic solvents and deprotonated amino acids has been performed. In addition to observations of the effect of side chain substitution, a comparison between measured and calculated properties has provided insight into the thermochemical effects arising from the isomeric nature of this clustering system. A new theoretical model describing the impact of a distribution of isomers on thermochemical measurements made via high pressure mass spectrometry is given. When this new model was applied, and the distribution of isomers correctly accounted for, the measured values of 〖∆H〗^°, 〖∆S〗^° and 〖∆G〗_298^° consistently agreed, to a very high degree of accuracy, with those predicted by MP2(full)/6-311++G(d,p)//B3LYP/6-311++G(d,p) calculations. As well, IR spectra for the clustering of deprotonated glycine with ROH have been calculated and analyzed to demonstrate the ability of techniques such as IRMPD to identify the presence of a distribution of isomers.