Information flow at the quantum-classical boundary 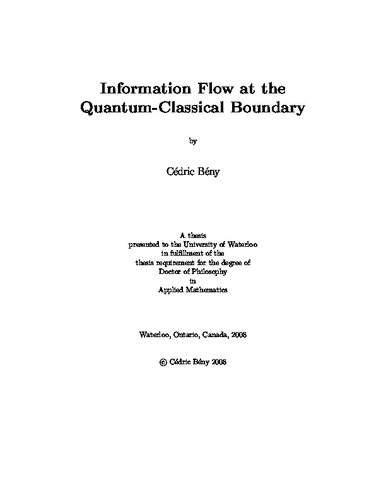 The theory of decoherence aims to explain how macroscopic quantum objects become effectively classical. Understanding this process could help in the search for the quantum theory underlying gravity, and suggest new schemes for preserving the coherence of technological quantum devices. The process of decoherence is best understood in terms of information flow within a quantum system, and between the system and its environment. We develop a novel way of characterizing this information, and give a sufficient condition for its classicality. These results generalize previous models of decoherence, clarify the process by which a phase-space based on non-commutative quantum variables can emerge, and provide a possible explanation for the universality of the phenomenon of decoherence. In addition, the tools developed in this approach generalize the theory of quantum error correction to infinite-dimensional Hilbert spaces. We characterize the nature of the information preserved by a quantum channel by the observables which exist in its image (in the Heisenberg picture). The sharp observables preserved by a channel form an operator algebra which can be characterized in terms of the channel's elements. The effect of the channel on these observables can be reversed by another physical transformation. These results generalize the theory of quantum error correction to codes characterized by arbitrary von Neumann algebras, which can represent hybrid quantum-classical information, continuous variable systems, or certain quantum field theories. The preserved unsharp observables (positive operator-valued measures) allow for a finer characterization of the information preserved by a channel. We show that the only type of information which can be duplicated arbitrarily many times consists of coarse-grainings of a single POVM. Based on these results, we propose a model of decoherence which can account for the emergence of a realistic classical phase-space. This model supports the view that the quantum-classical correspondence is given by a quantum-to-classical channel, which is another way of representing a POVM.