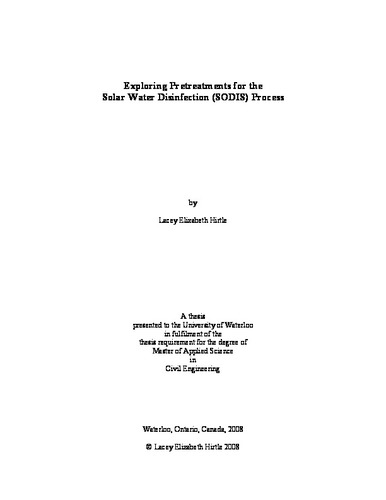 The use of sunlight for water disinfection has been practiced since ancient times. Only in the last three decades has solar disinfection become widely recognized as a viable means of providing safe drinking water to the disadvantaged portion of the world’s population. The World Health Organization estimates that 1.6 million people die every year because of waterborne diseases. <br/><br/> The Swiss Federal Institute of Environmental Science and Technology and their Department of Water and Sanitation in Developing Countries have been instrumental in propagating the solar water disinfection (SODIS) process in developing countries. The reason for this technology being widely used and accepted is its ease of use and effectiveness: water is placed in clear plastic bottles and exposed to direct sunlight for approximately six hours. The microorganisms in the water absorb the sunlight and it, in turn at sufficient UV dosages, causes mutations to their genetic material, inhibiting reproduction. Although some pathogens may still be viable they are no longer infective. The result is microbiologically safe water. <br/><br/> Research to date has explored everything from which colour and size the SODIS containers should be to whether adding catalysts to the water before exposure improves disinfection. Apart from a few studies that examined the effect of shaking the bottles (to entrain air) before exposure, there has been limited research on pretreatments for enhancing solar disinfection. <br/><br/> The focus of this project was to explore two pretreatments for SODIS and determine how they affect the efficiency of the process. The first stage was to examine one of the currently used pretreatments: cleaning the water containers before use. The second stage was to develop an accessible, low-cost filtration technique to remove particles from the water before exposure to sunlight. Particles in the water disperse the light and protect the microorganisms from being inactivated, so it is important to have as few particles as possible; the recommended upper limit is 30 NTU for solar disinfection. In many instances, surface water with high turbidity (greater than 200 NTU) serves as the only source for drinking water in developing areas. <br/><br/> The first series of experiments in the current research evaluated if cleaning the bottles was necessary and if so, which cleaning agents would be most effective and available. The agents selected were 70% isopropyl alcohol, a soap-water mixture, and lime juice. The experiments demonstrated that cleaning with 70% isopropyl alcohol did not affect the process in any way. Cleaning with the soap-water mixture did have a slightly negative effect on the process; there was substantial microbial recovery when bottles were kept in the dark overnight. In the case of the lime juice, it actually inhibited the disinfection process. It is necessary to remove any debris that might exist within the containers before using them, but using a chemical cleaning agent or mechanically scrubbing can decrease the amount of disinfection that occurs during SODIS. Thus, it is suggested that using a chemical pretreatment is not necessary and has the potential to inhibit disinfection, especially without proper training or technical knowledge. <br/><br/> The second series of experiments identified the optimal design for a low-cost roughing filter that could be used to remove particles from water before exposure to sunlight. The roughing filter that was built from the same plastic pop bottles used for solar disinfection, as well as gravel and sand. It was constructed with three centimetres of gravel on the bottom of the pop bottle and then 17 cm of coarse sand was added on top to make the total filter height 20 cm. A 0.6 mm hole was made at approximately 1.5 cm from the bottom of the bottle using a standard sewing needle. Each filter run consisted of 10 L of water at approximately 200 NTU. Experimental results indicated that 95% removal of turbidity could be achieved. These roughing filters can be constructed from readily available and affordable materials in developing countries and produce an effluent water quality of less than 30 NTU when initial turbidities are greater than 200 NTU. <br/><br/> Finally, the third series of experiments focused on testing the newly developed roughing filter in series with SODIS to evaluate the system as a whole. The results confirmed that using the roughing filter, as a pretreatment to SODIS, is a highly effective means of improving the disinfection potential of the process. These roughing filters produce an effluent water quality of less than 30 NTU, which is required for SODIS, making them a viable pretreatment for turbid water intended for SODIS use.