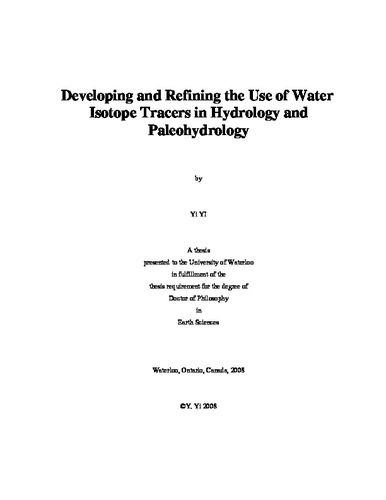 This thesis investigates stable isotope signals (i.e. δ18O and δ2H) in various information carriers such as lake water and lacustrine sediments, aiming to develop and refine the use of isotope tracers in hydrology and paleohydrology studies. Located at the confluence of the Peace and Athabasca Rivers at the western end of Lake Athabasca, the PAD is a key node in the Mackenzie River Drainage system, the single large freshwater source discharging into the Arctic Ocean from continental Northern America. The delta is one of the world’s largest freshwater deltas, has hundreds of shallow lakes and wetlands, and has been regularly monitored for isotopic composition in surface water bodies over a 7-year period. Because of the hydrological significance of the delta, as well as the availability of a wealth of ancillary information collected by previous studies, the PAD serves as a natural laboratory to develop and refine the application of stable isotopes in understanding landscape hydrological conditions in present and past. The outcomes also provide critical information for the development of scientifically informed management strategies for water resources in the delta. In the study of modern processes, a novel coupled isotope tracer method was developed to characterize the isotopic composition of input water to lakes. The method is based on coupling the well-known Craig-Gordon model, which describes the evaporative enrichment process for both isotopes, with the Local Meteoric Water Line to constrain the isotopic composition of input water to lakes. The application of this method in two sampling campaigns (2000 and 2005) demonstrated significant temporal changes in source water to PAD lakes at landscape scale. The results also revealed the previously underestimated role of snowmelt to the northern part of the delta. In a laboratory culture experiment, effort was undertaken to understand the constant fractionation between aquatic cellulose and environmental water, which is routinely observed in field studies. This led to the development of a new conceptual characterization of the apparent cellulose-water relation that reconciles discrepancies among previous observations. This new interpretation supports the notion that oxygen in cellulose is fully inherited from CO₂during photosynthesis, but that aquarium studies may incorporate an unintended artefact from CO₂that has not undergone complete biochemically mediated exchange with water. The variable slope of the cellulose-water δ18O relation observed in culture experiments is attributed to varying degree of exchange, related to the residence time of CO₂in the water. This is in contrast to natural systems where long residence time of CO₂is likely to ensure full exchange, thus supporting the application of a constant apparent cellulose-water oxygen isotope fractionation in paleoenvironmental studies. Insights gained from these studies were applied in a multiproxy paleolimnological investigation of a shallow lake in the central part of the delta near the shoreline of Lake Athabasca. The Craig-Gordon modelling approach was applied to quantitative interpretation of a cellulose d18O record from lake sediments. Constraints provided by interpretation of other proxies allowed the development of a semi-quantitative assessment of changes in lake water balance over the past one thousand years. The inferred hydrological history indicated significant shifts in the source of water to the lake, including persistent influence from Lake Athabasca during the Little Ice Age (~ AD 1540-1880), as well as rapid change during the last century that is unprecedented in the last millennium. Overall, the thesis demonstrates our improved understanding of hydrological conditions based on various isotopic archives such as lake water and aquatic cellulose. New information acquired from these studies concerning the range and rate of hydrological variability in the present and past provides a fundamental baseline for evaluating the potential impacts of future climate change and human disturbance in the Peace-Athabasca Delta.

Yi Yi (2008). Developing and refining the use of water isotope tracer in hydrology and paleohydrology. UWSpace. http://hdl.handle.net/10012/3903