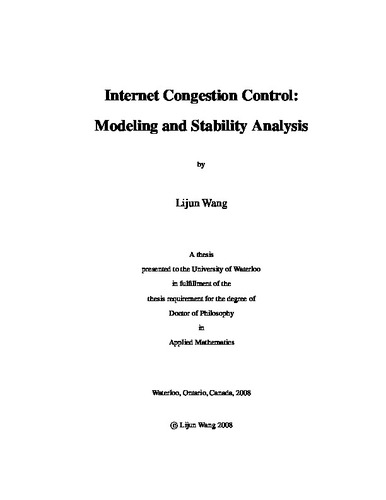 The proliferation and universal adoption of the Internet has made it become the key information transport platform of our time. Congestion occurs when resource demands exceed the capacity, which results in poor performance in the form of low network utilization and high packet loss rate. The goal of congestion control mechanisms is to use the network resources as efficiently as possible. The research work in this thesis is centered on finding ways to address these types of problems and provide guidelines for predicting and controlling network performance, through the use of suitable mathematical tools and control analysis. The first congestion collapse in the Internet was observed in 1980's. To solve the problem, Van Jacobson proposed the Transmission Control Protocol (TCP) congestion control algorithm based on the Additive Increase and Multiplicative Decrease (AIMD) mechanism in 1988. To be effective, a congestion control mechanism must be paired with a congestion detection scheme. To detect and distribute network congestion indicators fairly to all on-going flows, Active Queue Management (AQM), e.g., the Random Early Detection (RED) queue management scheme has been developed to be deployed in the intermediate nodes. The currently dominant AIMD congestion control, coupled with the RED queue in the core network, has been acknowledged as one of the key factors to the overwhelming success of the Internet. In this thesis, the AIMD/RED system, based on the fluid-flow model, is systematically studied. In particular, we concentrate on the system modeling, stability analysis and bounds estimates. We first focus on the stability and fairness analysis of the AIMD/RED system with a single bottleneck. Then, we derive the theoretical estimates for the upper and lower bounds of homogeneous and heterogeneous AIMD/RED systems with feedback delays and further discuss the system performance when it is not asymptotically stable. Last, we develop a general model for a class of multiple-bottleneck networks and discuss the stability properties of such a system. Theoretical and simulation results presented in this thesis provide insights for in-depth understanding of AIME/RED system and help predict and control the system performance for the Internet with higher data rate links multiplexed with heterogeneous flows.