NO3- and N2O at the Strawberry Creek Catchment: tracing sources and processes using stable isotopes 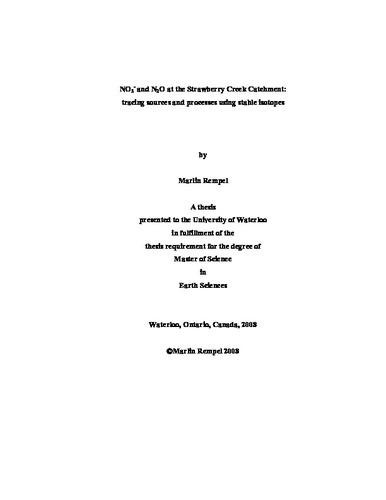 Nitrate (NO3) contamination in agricultural watersheds is a widespread problem that threatens local drinking supplies and downstream ecology. Dual isotopes of NO3- (d15N and d18O) have been successfully used to identify sources of NO3 contamination and nitrogen (N)-cycle processes in agricultural settings. From 1998 to 2000, tile drainage and stream waters at the Strawberry Creek Catchment were sampled for NO3- concentration and isotopes. The results suggest that tile NO3 were mainly derived from soil organic matter and manure fertilizers, and that they were not extensively altered by denitrification. NO3- concentrations and isotopes in the stream oscillated between the influence of tile inputs, during periods of higher basin discharge, and groundwater inputs, during low basin discharge. The affect of denitrification was evident in stream NO3- samples. Sources and processes of dissolved NO3- and N2O were explored using concentrations and stable isotopes during the 2007 Springmelt and 2008 mid-winter thaw events. Tiles are a source of NO3- to the stream during both events and concentrations at the outflow are above the 10 mg N/L drinking water limit during the 2008 mid-winter thaw. The stream was a source of N2O to the atmosphere during both events. d15N and d18O of N2O reveal that N2O is produced from denitrification during both events. d18O:d15N slopes measured in N2O were due to the influence of substrate consumption (tiles) and gas exchange (stream). The stable isotopes of dissolved NO3- and N2O were also characterized during non-melt conditions (October 2006 to June 2007 and Fall 2007) at the Strawberry Creek catchment. Again, the purpose was to determine the sources and processes responsible for the measured concentrations and isotopic signatures. The isotope data suggests that N2O was produced by denitrification. Furthermore, NO3- consumption and gas exchange altered the original N2O signature. Isotopic distinction between soil gas N2O and dissolved N2O is suggestive of different production mechanisms between the unsaturated and saturated zones. Since the range of dissolved N2O isotopes from the Strawberry Creek catchment are relatively constraned, definition of the local isotopic signature of secondary, agricultural N2O sources was possible.