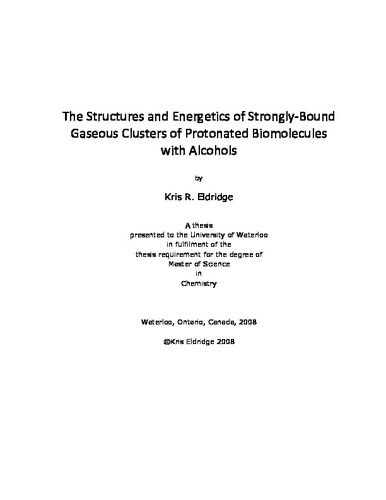 A growing interest in the strengths of several interactions that play important structural roles in biochemical systems has been building over the past couple decades. The binding energies and entropies of formation of the clusters of several protonated amino acids and nucleic acid bases with methanol have been measured using High Pressure Mass Spectrometry. The results generally show that binding energy decreases when the proton affinity difference between the alcohol and amino acid is increased. The structures and energies of various alcohol stabilized conformers of these protonated biomolecules were computed using ab initio calculations at the MP2(Full)/6‐311++g(2d,2p) level of theory. The enthalpies of formation of the lowest energy conformers of the proton‐bound clusters between the alcohols and amino acids or peptides match very closely with the experimental values, indicating that protonation and subsequent methanol attachment occurs primarily at the terminal amine functionality. The methanol stabilized protonated nucleic acid bases have energies that match closely with a more entropically favourable conformation of the cluster, hence yielding less negative enthalpy changes experimentally. The effect of alcohol size on binding energy was also monitored through measurements of enthalpies and entropies of formation for the clusters of protonated diglycine with several alcohols. The binding energy between protonated diglycine and benzene was also measured, yielding a measurable cation‐π interaction of over 20 kcal mol‐1, a comparable value to typical strong hydrogen bonds.