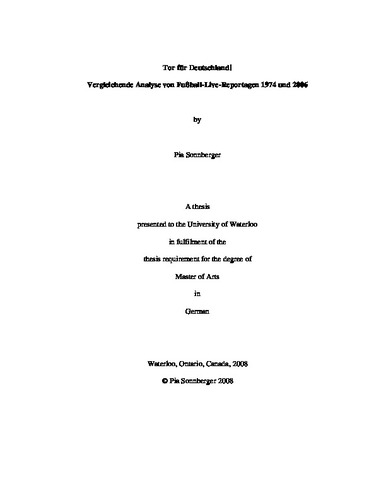 This thesis is a contribution to the research of media discourse. During the last decades the media landscape has changed dramatically. These changes have been especially evident in German TV programs and the rise of private TV channels. The purpose of this thesis is to explore some of these changes more thoroughly, focusing on the live TV coverage of three soccer matches during the Soccer World Cups of 1974 and 2006 in Germany. The major research question is how these commentaries changed over the years. The thesis analyses how the reporters describe the players, the team and the coach, as well as the sport and the match itself. The relationships between the reporters and their respective audiences as well as the changing functions of the reporters are subsequently examined. The methodological approach used is Critical Discourse Analysis (Fairclough, 2001; Fowler 1985; van Dijk, 2001). It provides a framework that allows analysing of language in its cultural and social context. Hence, discourse is seen as “language as a form of social practice” (Fairclough, 2001, p.18). Cultural and social contexts as well as extralinguistic factors such as images and sounds are also considered part of the discourse. The overall results indicate that in 2006 soccer has taken on greater importance in the lives of the audience. Live broadcasts of soccer matches have turned more and more into spectacles. This has led to phenomena such as the media’s growing preoccupation with entertainment (“infotainment”). Besides that, an increased presence of the ‘private’ in the public sphere can be discerned. In conclusion, this thesis identifies five principles prevalent in current live media broadcasts: commercialization, individualization, emotionalization, identification, and globalization. Even though some of these principles had already begun to emerge in the 1974 broadcast, their presence in 2006 attests to their increased importance in the German media landscape over time.