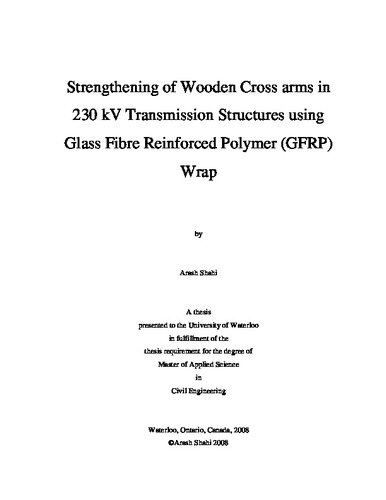 There are approximately 6000 Gulfport-type wood structures used to support 1600 km of 230 kV electrical transmission lines in Ontario. An unexpected structural failure caused by wood deterioration has been recognized as a major risk to the safety of these transmission lines. Since the reliability of the electricity transmission and distribution lines is extremely important to the electrical industry and other users of electricity, failure of these structures can result in devastating incidents. Due to the remote location of the transmission network and the requirement to keep the power lines in continuous service, replacement of the Gulfport structures has proved to be very difficult and expensive. This research program investigated the use of Glass Fibre Reinforced Polymer (GFRP) wrap as a light weight and durable strengthening system that can be applied to the existing structures without any interruptions in the functionality of the transmission lines. A total of three control specimens and three strengthened samples were tested in Phase I of the experimental program, which was designed as a feasibility study. It was concluded that the average strength of strengthened samples was 42% higher than the average strength of the control samples, and was greater than the end of life (EOL) threshold of 30 MPa for the cross arms. Therefore, the proposed strengthening system was concluded to be an effective solution for strengthening the deteriorated cross arms of the Gulfport structures. Taguchi methods and Analysis of Variation (ANOVA) were employed in Phase II to optimize the proposed strengthening system. The optimal configuration was determined to be the application of the filler material, non-sanded surface, and the shorter width of wrap (width of 0.6 m). The mean strength of the optimal configuration was estimated to be 52 MPa with a 95% confidence interval of: 38.7 MPa < True Mean < 65.3 MPa. Phase III confirmed the estimated mean and the confidence interval for the optimal configuration in Phase II. The strengthening system changed the failure mode from combined shear-flexure failure to pure flexure and resulted in more consistent strength and stiffness values. The strain values of the GFRP wrap showed that a single layer of wrap was sufficient for the confinement purposes.