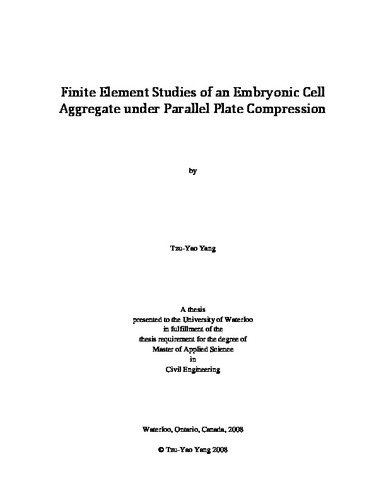 Cell shape is important to understanding the mechanics of three-dimensional (3D) cell aggregates. When an aggregate of embryonic cells is compressed between parallel plates, the cell mass and the cells of which it is composed flatten. Over time, the cells typically move past one another and return to their original, spherical shapes, even during sustained compression, although the profile of the aggregate changes little once plate motion stops. Although the surface and interfacial tensions of cells have been attributed to driving these internal movements, measurements of these properties have largely eluded researchers. Here, an existing 3D finite element model, designed specifically for the mechanics of cell-cell interactions, is enhanced so that it can be used to investigate aggregate compression. The formulation of that model is briefly presented and enhancements made to its rearrangement algorithms discussed. Simulations run using the model show that the rounding of interior cells is governed by the ratio between the interfacial tension and cell viscosity, whereas the shape of cells in contact with the medium or the compression plates is dominated by their respective cell-medium or cell-plate surface tensions. The model also shows that as an aggregate compresses, its cells elongate more in the circumferential direction than the radial direction. Since experimental data from compressed aggregates are anticipated to consist of confocal sections, geometric characterization methods are devised to quantify the anisotropy of cells and to relate cross sections to 3D properties. The average anisotropy of interior cells as found using radial cross sections corresponds more closely with the 3D properties of the cells than data from series of parallel sections. A basis is presented for estimating cell-cell interfacial tensions from the cell shape histories they exhibit during the cell reshaping phase of an aggregate compression test.