Regulation of Integrin Function by XGIPC 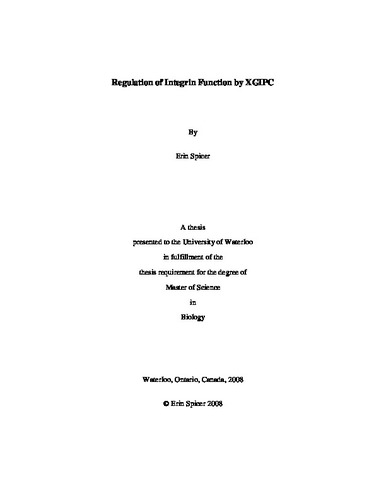 Integrins are a large family of transmembrane cell adhesion receptors that are found on the surface of eukaryotic cells. Integrins act predominantly as cell surface receptors for extracellular matrix (ECM) proteins, but also have bidirectional signaling properties that allow them to play fundamental roles in development and cancer metastasis. It has become clear that during gastrulation – a period during which cells participate in morphogenetic movements that lead to the generation of a tripoblastic embryo – the integrin repertoire of each cell is in constant flux. This change in cell surface receptors is mediated through intracellular pathways, which in turn, are regulated by associations with cytoplasmic proteins. One such molecule, GIPC (GAIP-interacting protein, C-terminus), is thought to have a role in regulating α5β1 integrin surface expression, as well as integrin-mediated inside-out and outside-in signaling pathways by mediating the integrin’s ability to interact with the ECM protein, fibronectin (FN). I use Xenopus laevis as my experimental model system to study GIPC-regulated integrin function. Xenopus provides a useful model system for regulation of integrin function as α5β1-FN interactions are spatially and temporally regulated. Additionally Xenopus embryos are amenable to molecular manipulations in vivo, and the tissue can be excised from embryos and cultured in vitro. I have investigated the function of GIPC using site-directed mutagenesis to alter the PDZ domain site in Xenopus GIPC (XGIPC). Expression of dominant negative XGIPC results in the interruption of gastrulation movements in the early embryo. Yeast two-hybrid and co-immunoprecipitation assays demonstrate that XGIPC physically interacts with the cytoplasmic domain of the α5 and α6 integrin subunit. Furthermore, I have determined that the interaction of XGIPC with α5β1 is required for assembly of a FN matrix. Cell migration and convergent extension assays demonstrate that XGIPC likely plays other undefined roles in modulating α5β1 function. XGIPC was found to be required for efficient trafficking of α5β1, as determined by α5β1 internalization assays in A6 cells. Together, my data indicate a critical role for XGIPC in modulating α5β1 integrin function during early embryonic morphogenesis.