Stabilizing the Psychological Dynamics of People in a Crowd 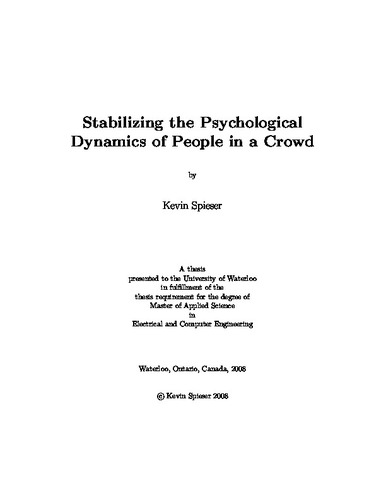 This thesis investigates the use of control theory as a means to study and ultimately control the psychological dynamics of people in a crowd. Gustav LeBon's suggestibility theory, a well-known account of collective behaviour, is used to develop a discrete-time nonlinear model of psychological crowd behavior that, consistent with suggestibility theory, is open-loop unstable. As a first attempt to stabilize the dynamics, linear observer-based output-feedback techniques and a collection of simple nonlinear control strategies are pursued. The poor performance afforded by these schemes motivates an agent-oriented control strategy in which authoritative figures, termed control agents, are interspersed within the crowd and, similar to the technique of feedback linearization, use knowledge of the system dynamics to issue signals that propagate through the crowd to drive specific components of the state to zero. It is shown that if these states are chosen judiciously then it follows that a collection of other state signals are, themselves, zero. This realization is used to develop a stability result for a simple crowd structure and this result is, in turn, used as a template to develop similar results for crowds of greater complexity. Simulations are used to verify the functionality of the reported schemes and the advantages of using multiple control agents, instead of a single control agent, are emphasized. While the mathematical study of complex social phenomena, including crowds, is prefixed by an assortment of unique challenges, the main conclusion of this thesis is that control theory is a potentially powerful framework to study the underlying dynamics at play in such systems.