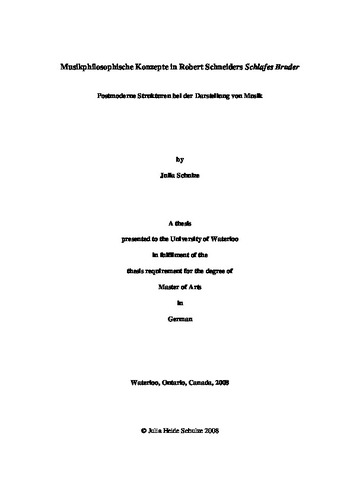 This thesis analyses the novel Schlafes Bruder, written by the Austrian author Robert Schneider in 1992. The analysis focuses on the presentation of music throughout the work and specifically examines how different philosophical theories of music are treated within the novel. Throughout this investigation it is shown that the discussion of music is characterized by a typical post-modern, self-contradictory structure, which other critics have already perceived in other aspects of the novel. The first chapter introduces the topic of this thesis, gives a summary of existing research, and presents different assessments of the novel. In addition, it outlines the main arguments of the philosophical theories that formulate the basis for the subsequent in-depth analysis of Schlafes Bruder. The second chapter continues the analysis of the text, beginning with the examination of the narrator. Although it is revealed that the narrator is depicted as a contradictory figure, it makes several statements about the notion of music and hints at the philosophical theories that influence it. The third chapter deals with the presentation of the musicality that is shown in the inner world of the story. Here, the focus lies on the awakening of the genius protagonist, his musical production and the reaction of the audience to his music. The last chapter concludes that the text uses and establishes philosophical theories of music, while also undermining them, leaving no final statement in this discussion of music. The post-modern character is, in this way, also seen in the debate surrounding the philosophy of music.