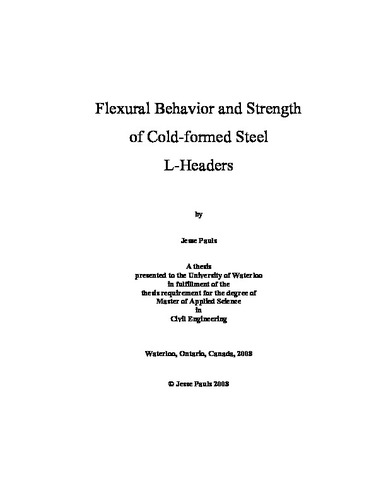 Cold-formed steel framing of residential and light commercial buildings continues to grow in popularity due to its structural and material advantages. The North American steel industry is actively performing research studies and developing design standards to assist in the cost-effectiveness of cold-formed steel in these markets. Cold-formed steel L-headers are structural components used over wall openings to transfer the loads to adjacent king studs. Recently, there has been an increased interest in L-headers among homebuilders primarily due to their ease of installation and low material cost. Design of the L-headers in North America is currently governed by the North American Standard for Cold Formed Steel Framing – Header Design, in combination with the North American Specification for Design of Cold Formed Steel Structural Members. However, the design provisions in the AISI - Header Design Standard are particularly limiting. For instance, the method for evaluation of span deflections for both single and double L-headers, and uplift flexural strength for single L-headers is currently not available primarily due to lack of research on the issues. Presented in this thesis are the findings from an extensive laboratory testing program of full-scale single and double cold-formed steel L-headers. The objective of the research was to investigate the structural behavior of L-headers under both gravity and uplift loads. From the analysis, improved ultimate flexural strength design expressions and new vertical deflection expressions for single and double L-header assemblies were developed. The concept of semi-rigid members was introduced to evaluate the flexural behavior and deflection performance of L-header assemblies.