Phosphorus and nitrogen in the Al-Hawizeh marshes, southern Iraq 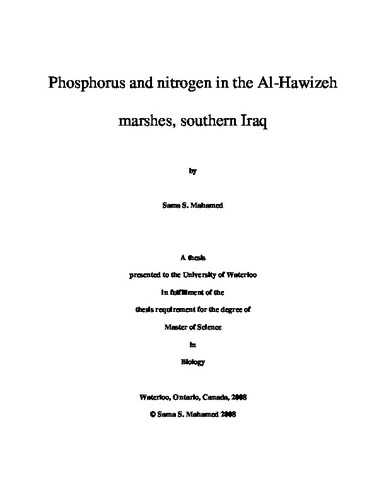 Hour Al-Hawizeh is one of the biggest marshes within the Mesopotamian marshes of southern Iraq. This Hour has been functioned for centuries under natural conditions providing resources for local people, important habitat for migrating birds, and a major source of the natural hydrology in the Middle East. In the early 1990’s, the Mesopotamian marshes were intentionally drained. This disaster has adversely affected the biodiversity of the marshes. In April 2003, these marshes were inundated again with the hope that this ecosystem will return to its previous nature. This new condition led many of scientist and researchers to investigate how the ecosystem behaves after being re-flooded and to assess the restoration progress of these re-flooded areas. In this study, I focused on phosphorus (P) and nitrogen (N), as they are two of the commonly limiting factors for the health of any aquatic system. The main goals of this study are: 1) to determine the TP and TN budget in relation to the water budget of Hour Al-Hawizeh and examine how the water inlets contribute the water supply and nutrient load and determine whether Hour Al-Hawizeh acts as a sink or a source of P and N, whether this varies among sections of the marsh with different flooding histories, and its consequences for the restoration of the marsh, 2) to investigate the TP and TN variation and composition in eight marshes within Hour Al-Hewaizah and investigate the relationship of the phytoplankton component, as indicated by chlorophyll-a, with TN and TP concentrations in Hour Al-Hawizeh. TP and TN budgets suggested that Hour Al-Hawizeh acts as a sink for phosphorus and source for nitrogen. In this study, the annual retention of TP was approximately 128 tons, while annual release of TN was 237 tons. TP and TN concentration within the eight marshes within Hour Al- Hawizeh exhibited different seasonal patterns during the study period, which is likely attributable to with the variable sources and transformations of phosphorus and nitrogen in the selected marshes. In addition, the study revealed a significant relationship between chlorophyll-a concentration and TP and TN. However, the relationship between chlorophyll-a and TN was stronger. The differences in water quality parameters, TP, TN, and chlorophyll-a concentration between the marshes within Hour Al-Hawizeh suggest that Hour Al-Hawizeh is not a one homogeneous system and each marsh acts as a unique system.