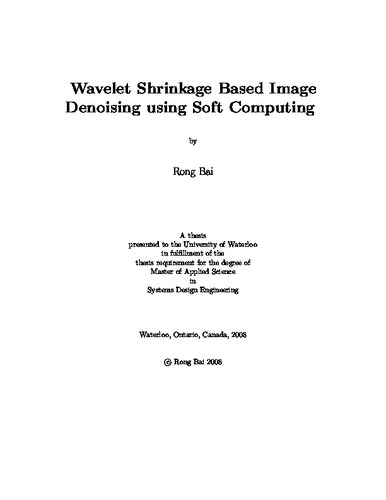 Noise reduction is an open problem and has received considerable attention in the literature for several decades. Over the last two decades, wavelet based methods have been applied to the problem of noise reduction and have been shown to outperform the traditional Wiener filter, Median filter, and modified Lee filter in terms of root mean squared error (MSE), peak signal noise ratio (PSNR) and other evaluation methods. In this research, two approaches for the development of high performance algorithms for de-noising are proposed, both based on soft computing tools, such as fuzzy logic, neural networks, and genetic algorithms. First, an improved additive noise reduction method for digital grey scale nature images, which uses an interval type-2 fuzzy logic system to shrink wavelet coefficients, is proposed. This method is an extension of a recently published approach for additive noise reduction using a type-1 fuzzy logic system based wavelet shrinkage. Unlike the type-1 fuzzy logic system based wavelet shrinkage method, the proposed approach employs a thresholding filter to adjust the wavelet coefficients according to the linguistic uncertainty in neighborhood values, inter-scale dependencies and intra-scale correlations of wavelet coefficients at different resolutions by exploiting the interval type-2 fuzzy set theory. Experimental results show that the proposed approach can efficiently and rapidly remove additive noise from digital grey scale images. Objective analysis and visual observations show that the proposed approach outperforms current fuzzy non-wavelet methods and fuzzy wavelet based methods, and is comparable with some recent but more complex wavelet methods, such as Hidden Markov Model based additive noise de-noising method. The main differences between the proposed approach and other wavelet shrinkage based approaches and the main improvements of the proposed approach are also illustrated in this thesis. Second, another improved method of additive noise reduction is also proposed. The method is based on fusing the results of different filters using a Fuzzy Neural Network (FNN). The proposed method combines the advantages of these filters and has outstanding ability of smoothing out additive noise while preserving details of an image (e.g. edges and lines) effectively. A Genetic Algorithm (GA) is applied to choose the optimal parameters of the FNN. The experimental results show that the proposed method is powerful for removing noise from natural images, and the MSE of this approach is less, and the PSNR of is higher, than that of any individual filters which are used for fusion. Finally, the two proposed approaches are compared with each other from different point of views, such as objective analysis in terms of mean squared error(MSE), peak signal to noise ratio (PSNR), image quality index (IQI) based on quality assessment of distorted images, and Information Theoretic Criterion (ITC) based on a human vision model, computational cost, universality, and human observation. The results show that the proposed FNN based algorithm optimized by GA has the best performance among all testing approaches. Important considerations for these proposed approaches and future work are discussed.