Geotechnics and hydrology of landslides in Thompson River Valley, near Ashcroft, British Columbia 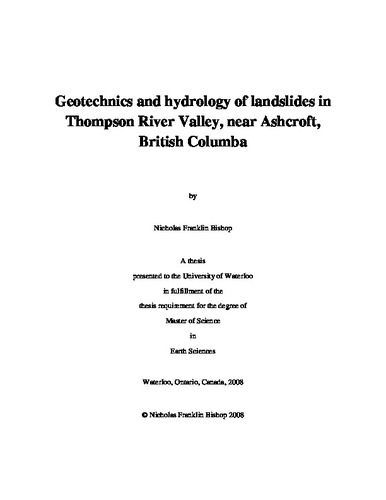 Landslides in Pleistocene sediments along the Thompson River, south of Ashcroft, British Columbia have been known since before the Canadian Pacific (CP) railway was built through the valley in the 1880s. The Canadian National (CN) mainline railway, built in the early twentieth century, also follows the valley. Since the CP mainline was open to traffic in 1886, landslides have occurred along both sides of the Thompson valley and have resulted in derailments and traffic disruption along this strategic railway corridor. Past work identified a critical interbedded glaciolacustrine silt and clay unit at the base of the valley fill in which the sliding planes of the landslides were located. In our geotechnical characterization of this unit we identify the clay as the main contributing factor towards the instability of slopes in the Thompson River Valley due to its low residual strength parameters. Ring shear testing of this unit indicate residual friction angles between 10o and 15o. The use of residual shear strength parameters is necessitated by the presence of pre-sheared surfaces in the valley fill material caused by historical landsliding and glacial overriding. An additional contributing factor to slope instability in Thompson River Valley is the presence of artesian pore water pressures located below the failure surfaces of landslides in the valley. Previously suggested explanations for development of the elevated pore pressures include dynamic change in the Thompson River stage, and over irrigation of upslope farm lands. Groundwater models of Thompson River Valley were constructed using the advanced modeling tool HydroGeoSphere in order to determine the origin of these elevated pressures, and to explore additional influences on the regional groundwater flow system, including irrigation and river stage. Analysis of groundwater simulations showed that due to its low permeability, the glaciolacustrine silt and clay unit is important in controlling groundwater flow patterns, and explains the development of artesian pressures in the valley bottom. Further, it was shown that fluctuation in river stage and additional infiltration due to irrigation of upslope farm lands had minimal impact on pore water pressures, and cannot explain the development of landslides in the study area. Groundwater simulations were coupled with slope stability analyses in order to assess the slope Factor of Safety associated with certain groundwater conditions. This was achieved by using SLOPE/W and SEEP/W. Slopes were found to be unstable under natural conditions with a Factor of Safety close to unity. Significant changes to the Factor of Safety were noted for scenarios where precipitation was doubled and halved, but irrigation was again shown to have a minimal effect on the stability of Thompson Valley slopes.