Impacts of Mixtures of Copper and 1,2-dihydroxyanthraquinone on Physiology and Gene Expression in Lemna gibba L.G-3 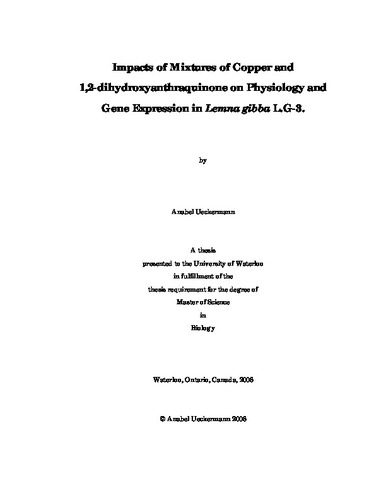 Polycyclic aromatic hydrocarbons (PAHs) and metals are co-contaminants of aquatic environments near industrial and urbanized areas. Mixtures could result in synergistic toxicity impairing macrophyte growth and potentially causing bioaccumulation and biomagnification throughout the ecosystem. In this study, combinations of 1,2-dihydroxyanthraquinone (1,2-dhATQ) and copper (Cu) at low concentrations synergistically inhibited Lemna gibba (duckweed) growth. Further analysis using fluorescence techniques showed an increase in reactive oxygen species (ROS) levels upon Cu exposures possibly through redox cycling in the chloroplasts. Pulse amplitude modulated (PAM) and fast repetition rate fluorometry (FRRF) indicated that plants exposed to 1,2-dhATQ had impaired photosynthetic electron transport that manifested as a decrease in the yield of photosynthesis and change in the redox status of the plastoquinone (PQ) pool. At the gene expression level acetyl coA carboxylase (ACC), a key enzyme in membrane repair, and serine decarboxylase (SDC), another enzyme needed for membrane repair were up-regulated in response to copper and 1,2-dhATQ, respectively. The mechanism for mixtures toxicity is thought to involve the reduced PQ pool which could serve as a source of electrons for copper redox cycling thereby increasing ROS production and causing synergistic growth inhibition. When the antioxidant glutathione (GSH) was added, copper toxicity was ameliorated but 1,2-dhATQ toxicity increased possibly through formation of reactive conjugates or suppression of the native antioxidant system. This study emphasizes that mixtures of toxicants at low concentrations can cause more biological damage than individual toxicants via alterations of the redox status and increases in ROS production.

Anabel Ueckermann (2008). Impacts of Mixtures of Copper and 1,2-dihydroxyanthraquinone on Physiology and Gene Expression in Lemna gibba L.G-3. UWSpace. http://hdl.handle.net/10012/3871