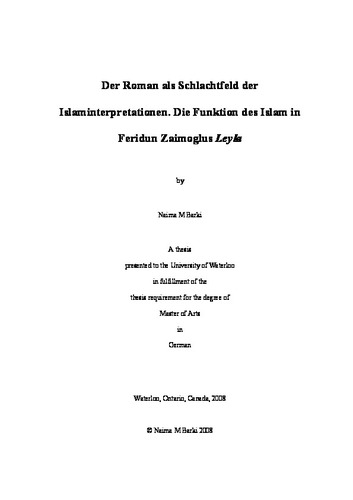 Although modern Germany is a multicultural and multireligious society, a fact reflected by the growing number of works on the lives of migrants to Germany by authors from non-German backgrounds, it is still difficult to find much scholarly study of the role of Islam in these works. Since 9/11 Islam has become a prime theme of German public discourse, yet still its presence as a topic of study in Germanistik remains rare. In an effort to provide a partial rectification of this situation this thesis examines Feridun Zaimoglu’s novel Leyla (2006) and the role that Islam plays in the story. One of the most well-known Turkish-German authors writing today, Feridun Zaimoglu has been in the public eye since the appearance of his first book Kanak Sprak – 24 Mißtöne vom Rande der Gesellschaft (1995). Zaimoglu’s writings often focus on the lives of Turkish migrants and their children in Germany, yet Leyla is set completely in 1950s Turkey. The story follows the title figure as she grows up in a small Anatolian village which she eventually leaves for Istanbul and, at the very end of the novel, for Germany. Oppressed for most of her life by an abusive father, Leyla learns to chart her own course between traditional values and expectations and a more independent lifestyle. The thesis first establishes Islam’s heterogeneous character. Two perspectives of Islam, a patriarchal-traditional Islam and an enlightened Islam, are put forward as analytical frameworks for a nuanced interpretation of this complex novel. By applying the concept of the personal or inner jihad to the novel it is possible to establish that the novel presents a variety of versions or ways of Islam that are considered and confronted by the protagonist, and that this development on her part embodies the essential conflicts of the story. Leyla, who suffers from the oppression of a patriarchal form of Islam that has dominated the lives of her mother and siblings, gradually turns towards a more enlightened form of Islam that nevertheless retains features of traditional belief. The thesis contends that the novel’s complex exposition of Turkish society in the 1950s can be better understood when the novel’s relationship to the discourses of Islam are taken into account and employed as interpretive aids.