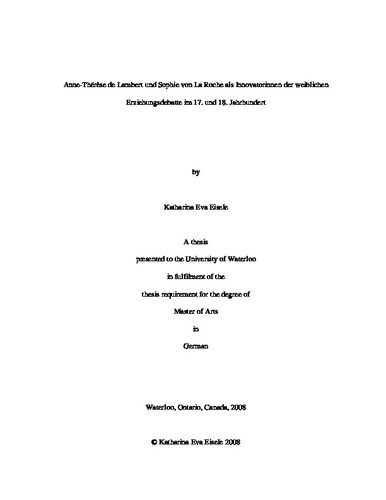 France played a leading role in the European Enlightenment, influencing other European countries in their thinking and development of philosophical ideas based on the emerging ideals of liberté, égalité and fraternité. Among the many topics alive in intellectual circles at the time, a debate about the education of females peaked in the 18th century, and it is not surprising that it was a Frenchman, François Fénelon, who drew attention first through his Traité de l'éducation des filles (1687) to the lack of education for females. His countrywoman Madame de Lambert extended his argument in her Avis d’une mère à sa fille (1688-1692, published 1728), a lengthy essay addressed to her daughter justifying the importance and describing the nature of female education. A half century later in Germany, Sophie von La Roche published her Briefe an Lina: Ein Buch für junge Frauenzimmer[,] die ihr Herz und ihren Verstand bilden wollen in her weekly paper Pomona für Teutschlands Töchter (1783/84). In these letters, collected and published in book form in 1807, she described the principles of a program of education for women which would lead to a happy life. Both of these female writers were exceptions in their time and fought to establish the position of women as educated and valued members of society. This thesis contextualizes and examines their writings to answer the question to what degree they contributed to a progressive step in the education of women at the time and the cultivation of educated and critical thinking in the next female generation. Hippolyte Taine’s sociological method assumes that literature can be analyzed through its author’s life on the basis of the three key concepts, race, milieu, and moment. After applying these concepts to the life of Madame de Lambert and Sophie von La Roche through historical background and sociological analysis, a close textual examination of the two central texts proceeds with these points of emphasis in each woman’s case: biographical background and social role determination (Frauenbild und Bestimmung der Frau); accommodation to the notion of ‘pleasing’ society, the males especially, and instilling happiness in others and themselves (Gefallen und Glück); and the education and erudition of women (Bildung und Gelehrsamkeit). Their contributions to these areas of active life and intellectual debate illustrate to some extent a personal adaptation to the conventions and standards of the era, but more importantly, beyond that, a breakout from traditional ideas and practices. In sum, Madame de Lambert is seen as a pioneer in the philosophical evaluation of the intellectual strength of women, and Sophie von La Roche, as a German counterpart with an emphasis on their practical enlightened education. The comparative analysis also reveals important sociological differences between Germany and France in the 18th century with regard to the subject of female education.