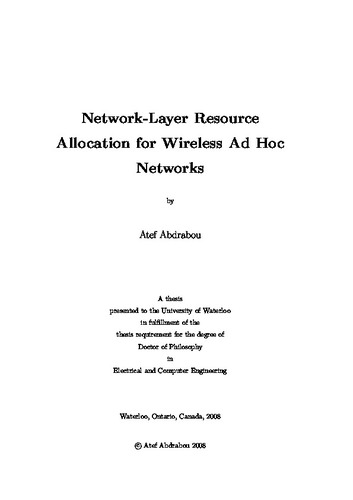 This thesis contributes toward the design of a quality-of-service (QoS) aware network layer for wireless ad hoc networks. With the lack of an infrastructure in ad hoc networks, the role of the network layer is not only to perform multihop routing between a source node and a destination node, but also to establish an end-to-end connection between communicating peers that satisfies the service level requirements of multimedia applications running on those peers. Wireless ad hoc networks represent autonomous distributed systems that are infrastructure-less, fully distributed, and multi-hop in nature. Over the last few years, wireless ad hoc networks have attracted significant attention from researchers. This has been fueled by recent technological advances in the development of multifunction and low-cost wireless communication gadgets. Wireless ad hoc networks have diverse applications spanning several domains, including military, commercial, medical, and home networks. Projections indicate that these self-organizing wireless ad hoc networks will eventually become the dominant form of the architecture of telecommunications networks in the near future. Recently, due to increasing popularity of multimedia applications, QoS support in wireless ad hoc networks has become an important yet challenging objective. The challenge lies in the need to support the heterogeneous QoS requirements (e.g., data rate, packet loss probability, and delay constraints) for multimedia applications and, at the same time, to achieve efficient radio resource utilization, taking into account user mobility and dynamics of multimedia traffic. In terms of research contributions, we first present a position-based QoS routing framework for wireless ad-hoc networks. The scheme provides QoS guarantee in terms of packet loss ratio and average end-to-end delay (or throughput) to ad hoc networks loaded with constant rate traffic. Via cross-layer design, we apply call admission control and temporary bandwidth reservation on discovered routes, taking into consideration the physical layer multi-rate capability and the medium access control (MAC) interactions such as simultaneous transmission and self interference from route members. Next, we address the network-layer resource allocation where a single-hop ad hoc network is loaded with random traffic. As a starting point, we study the behavior of the service process of the widely deployed IEEE 802.11 DCF MAC when the network is under different traffic load conditions. Our study investigates the near-memoryless behavior of the service time for IEEE 802.11 saturated single-hop ad hoc networks. We show that the number of packets successfully transmitted by any node over a time interval follows a general distribution, which is close to a Poisson distribution with an upper bounded distribution distance. We also show that the service time distribution can be approximated by the geometric distribution and illustrate that a simplified queuing system can be used efficiently as a resource allocation tool for single hop IEEE 802.11 ad hoc networks near saturation. After that, we shift our focus to providing probabilistic packet delay guarantee to multimedia users in non-saturated IEEE 802.11 single hop ad hoc networks. We propose a novel stochastic link-layer channel model to characterize the variations of the IEEE 802.11 channel service process. We use the model to calculate the effective capacity of the IEEE 802.11 channel. The channel effective capacity concept is the dual of the effective bandwidth theory. Our approach offers a tool for distributed statistical resource allocation in single hop ad hoc networks, which combines both efficient resource utilization and QoS provisioning to a certain probabilistic limit. Finally, we propose a statistical QoS routing scheme for multihop IEEE 802.11 ad hoc networks. Unlike most of QoS routing schemes in literature, the proposed scheme provides stochastic end-to-end delay guarantee, instead of average delay guarantee, to delay-sensitive bursty traffic sources. Via a cross-layer design approach, the scheme selects the routes based on a geographical on-demand ad hoc routing protocol and checks the availability of network resources by using traffic source and link-layer channel models, incorporating the IEEE 802.11 characteristics and interaction. Our scheme extends the well developed effective bandwidth theory and its dual effective capacity concept to multihop IEEE 802.11 ad hoc networks in order to achieve an efficient utilization of the shared radio channel while satisfying the end-to-end delay bound.