Reconstruction of Paleoclimate Time-Series in the Peace-Athabasca Delta, Northern Alberta, from Stable Isotopes in Tree-Rings 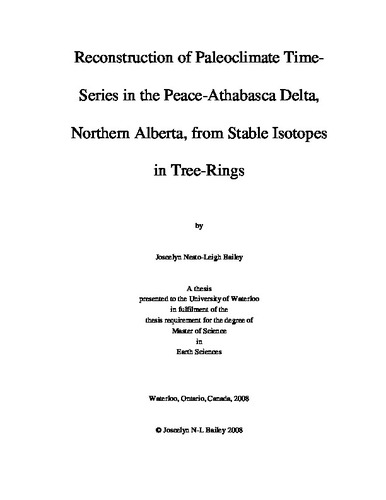 The isotopic labelling of carbon in tree-rings varies as a function of growth season temperature and relative humidity. The isotopic labelling of oxygen in tree-rings varies as a function of source-water isotopic composition and humidity-dependent evaporative enrichment of leaf water during the growth season. The season of carbon-isotope labelling was identified statistically as late-spring to early-fall (April to October) for temperatures and relative humidity with a three-year weighted (50-30-20) carry-over due mainly to stored photosynthates. The season of oxygen-isotope labelling was identified statistically as a combination of a winter (pDecember to March) source-water signal (temperature-dependent precipitation isotope composition) with a late-spring to early-fall (April to October) humidity signal (evaporative enrichment of leaf water). A two-year carry-over was attributed to the residence time of soil water, but no notable photosynthate carry-over was identified. Carbon- and oxygen- (mechanistic) isotope response surface models were then compared and contrasted to regression-based bivariate and univariate models. It was found that in most cases the isotope response surface models were the best means of predicting isotopic labelling when environmental data are known. The carbon-isotope response surface was used to reconstruct 50-years (AD 1900-1954) of relative humidity data by introducing measured carbon isotope values and instrumental growth season temperature. During the analysis of the oxygen-isotope response surface we found an isotope-temperature relation that appears to reflect circulation-dependent damping. To verify this we introduced scaled values of the North Pacific index as a proxy for this suppression. The coupling of the isotope response surfaces generated a humidity reconstruction that is also thought to be driven by atmospheric circulation. Our reconstruction shows that the fluctuations in temperature range have not exceeded the natural variability in the instrumental record of the 20th century; however, the atmospheric moisture (humidity) reconstruction predicts a directional drying trend in the Peace-Athabasca Delta that appears to reflect increasingly zonal circulation in western Canada over this period.