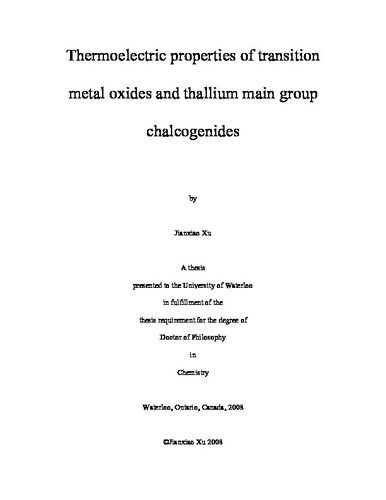 Thermoelectric energy (TE) conversion can be used to create electricity from temperature gradients. Hence power can be generated from waste heat using TE materials, e.g. from the exhaust in automotives. This power in turn may lead to a reduction of gas consumption by reducing the alternator load on the engine. Because of the increasing demand and limited availability of energy sources, there is strong and renewed interest in advancing thermoelectric materials. Past research shows that the best TE materials are narrow band gap semiconductors composed of heavy elements, exhibiting a large Seebeck coefficient, S, combined with high electrical conductivity, σ, and low thermal conductivity, κ. Various research projects have been attempted during the past four years of my Ph.D. studies. These include the synthesis, crystal structure studies, electronic structure calculations and thermoelectric properties of transition metal oxides and thallium main group chalcogenides. Because of the good thermal stability, lack of sensitivity to the air, and non-toxicity, transition metal oxides are potential candidates for commercial thermoelectric applications. During the investigation of oxides for thermoelectric application, several interesting features of different transition metal oxides have been discovered: 1. A new quaternary layered transition-metal oxide, Na2Cu2TeO6, has been synthesized under air using stoichiometric mixtures of Na2CO3, CuO and TeO2. Na2Cu2TeO6 crystallizes in a new structure type, monoclinic space group C2/m with a = 5.7059(6) Å, b = 8.6751(9) Å, c = 5.9380(6) Å,  = 113.740(2)°, V = 269.05(5) Å3 and Z = 2, as determined by single crystal X-ray diffraction. The structure is composed of[Cu2TeO6] layers with the Na atoms located in the octahedral voids between the layers. Na2Cu2TeO6 is a green nonmetallic compound, in agreement with the electronic structure calculation and electrical resistance measurement. 2. An n-type narrow band gap semiconductor, LaMo8O14, exhibiting the high Seebeck coefficient of -94 μVK-1 at room temperature has been investigated. 3. Pb0.69Mo4O6 with a new modulated structure and stoichiometry was determined from single-crystal X-ray diffraction data. The compound crystallizes in the tetragonal super space group, P4/mbm(00g)00ss, with a = 9.6112(3) Å, c = 2.8411(1) Å, q = 0.25c*, which is different from the previously reported structure. As for the research of thermoelectric properties of thallium main group chalcogenides, three new ternary thallium selenides, Tl2.35Sb8.65Se14, Tl1.97Sb8.03Se13 and Tl2.04Bi7.96Se13, have been discovered. All three compounds crystallize in the same space group P21/m with different cell parameters, and in part different Wyckoff sites, hence different structure types. The three selenides with similar structures are composed of distorted edge-sharing (Sb,Bi)Se6 octahedra, while the distorted Tl/(Sb, Bi) sites are coordinated by 8 - 9 Se atoms. Electronic structure calculations and physical property measurements reveal they are semiconductors with high Seebeck coefficient but low electrical conductivity, and therefore not good thermoelectrics. On the other hand, our transport property measurements on the unoptimized Tl2SnTe3 sample show interesting thermoelectric properties of this known compound. Advanced thermoelectrics are dominated by antimonides and tellurides so far. The structures of the tellurides are mostly composed of NaCl-related motifs, hence do not contain any Te–Te bonds. All of the antimonide structures containing Sb–Sb bonds of various lengths are much more complex. The Sb atom substructures are Sb24– pairs in β-Zn4Sb3, linear Sb37– units in Yb14MnSb11, planar Sb44– rectangles in the skutterudites, e.g., LaFe3CoSb12, and Sb8 cubes interconnected via short Sb–Sb bonds to a three-dimensional network in Mo3Sb5Te2. The results of electronic structure calculations suggested that these interactions have a significant impact on the band gap size as well as on the effective mass around the Fermi level, which represent vital criteria for advanced thermoelectrics. The crystal structure and electronic structure investigation for the unique T net planar Sb–Sb interactions in Hf5Sb9 will be also presented, although Hf5Sb9 is metallic compound with poor thermoelectric performances.