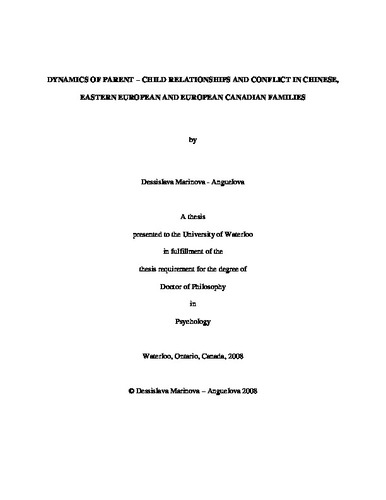 In my thesis, I studied patterns of associations between the quality of parent-child relations and components of parent-child conflict in families with preadolescent children from European Canadian families, as well as recent immigrant families of Chinese and Eastern European backgrounds. A sample of 96 provided the data, which I organized in three parts. Part 1 examined associations between the quality of parent-child relations and confrontation in parent-child conflicts. 277 children and parents from 96 families participated (i.e., 96 children, 96 mothers, and 85 fathers). Hierarchical regression analyses were conducted to predict children's and parents' confrontation in conflicts at the parent-child dyadic level. In all models, the parent-child relationships variables (i.e., lower levels of egalitarian warmth and higher levels of power assertive parenting strategies) jointly predicted each family member's confrontation in conflicts over and above the contribution of the cultural differences. Few interactions were found. These results suggest that there are general principles governing the interface between family relationships and parent-child conflicts that transcend culturally specific socialization practices in these groups. Part 2 investigated associations between children's and parents' English knowledge, use and preference for the host or native language, and the quality of parent-child relationships and conflict negotiation in the Chinese and Eastern European immigrant families. 183 family members participated: 64 children, 64 mothers and 55 fathers. Participants independently filled out questionnaires on parent-child relationship and assessments of English knowledge and use. The results demonstrated that (1) children's English knowledge is related to warm and egalitarian relationships with their parents; (2) children's use and preference for using English at home is related to the quality of children’s relationship and conflict negotiation with mothers but not with fathers; and (3) contrary to expectations, parents' knowledge of English and the gap between parents’ and children’s English knowledge was not associated with the quality of parent-child relationships in the first years of families' adaptation to Canada. Part 3 examined associations between frequencies of conflict components with particular focus on actual and desired conflict outcomes within individually reported conflicts in parent-child dyads from the three cultural groups. Ninety two children and mothers and 75 fathers provided diary accounts of parent-child conflicts, reporting on types of conflicts, conflict outcomes, their individual satisfaction with conflict endings and any aspects of conflict that they would have changed in retrospect. Moreover, each respondent reported on their dyadic partner’s typical use of conflict strategies across daily disputes. The participants reported 1406 conflicts over a period of two weeks. Several interesting patterns of findings emerged: First, very few cultural differences emerged; rather, similar frequencies of reported conflict issues and outcomes were found across the three cultural groups. Second, preadolescent children and parents appear to have different views on which conflict components are associated with frequency of particular outcomes. Mothers' views of conflict endings are more frequently related to the nature of conflict issues than children's and fathers' views. Preadolescent children, being generally dependent on their parents, are less often likely to experience control over how conflicts should be resolved; however, they have clear views on how specific conflict issues should be resolved. More specifically, children often wished to submit when they often argued with their parents about obligations but expressed wishes to yield in retrospect less often when they argued over activities of their personal choice. In turn, mothers were less likely to compromise when they often argued over obligations and were more often likely to do so when they disagreed with their children over children's personal interests. Fathers, however, may expect to exert control regardless of the conflict issue that is being negotiated and appear satisfied when they often won. Third, conflicts over children's misbehavior appeared to be particularly salient for parents but not for their children. Parents reported more conflicts over children's misbehavior than their children did, such conflicts were related to frequencies of reported standoffs, parents were often dissatisfied and desired more often changes for constructive negotiation by both sides of parent-child dyads than their children did. Children, on the other hand, often chose not to report conflicts related to their misbehavior, which likely showed self-serving biases in disclosing their own transgressions. Fourth, children's and parents' desires for a change in reported conflicts in retrospect often did not challenge but re-affirmed patterns of actual conflict outcomes, which likely suggests that in preadolescence certain conflict sequences are relatively well established. Finally, the findings presented in Part 3 are among the first to provide evidence of links between frequencies of conflict issues, intensity of disagreements, actual and desired outcomes in parent-child dyads from three cultural groups. This multicultural study contributes to the existing literature (1) by substantiating the generality of interrelations between major qualities of parent-child relationships, (2) by providing evidence of the relations between children's and parents' English knowledge and the quality of their relationships and conflict negotiation in the earlier phases of acculturation, and (3) by providing a nuanced presentation of children's and parents' views on how they resolve conflicts on a daily basis. These evaluations provide an integrated picture of how preadolescents view and assess as well as are being viewed and assessed by their parents on important relationships matters.