Perceptions of Inevitability and the Motivated Rationalization of Social Inequality 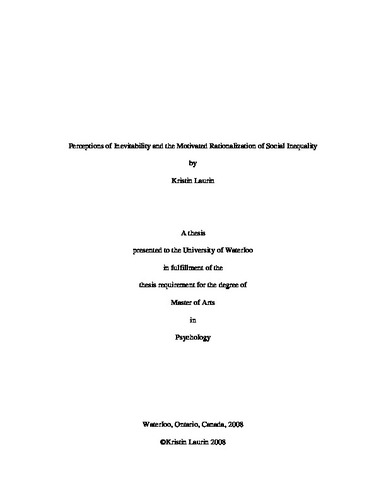 It is suggested that people’s perceptions that they are inevitably tied to the social systems within which they operate motivate them to justify these systems. Evidence is obtained across four experimental studies using a variety of different methods. All studies test the basic proposition that increasing inevitability – that is, making a system seem either more difficult to escape or more unlikely to change – increases motivated rationalization. Studies 1 and 2 demonstrate this basic phenomenon, using a known measure of system justification. Studies 3 and 4, in addition to conceptually replicating this phenomenon via different paradigms, provide support for a motivational (as opposed to purely cognitive-inferential) account, and mediational and moderational evidence for my proposed mechanism, respectively. The implications of these results – for the refinement of system justification theory – are discussed.