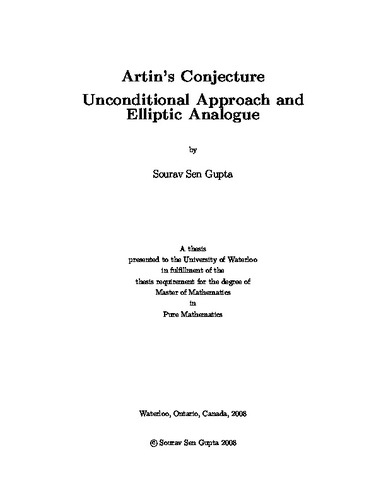 In this thesis, I have explored the different approaches towards proving Artin's `primitive root' conjecture unconditionally and the elliptic curve analogue of the same. This conjecture was posed by E. Artin in the year 1927, and it still remains an open problem. In 1967, C. Hooley proved the conjecture based on the assumption of the generalized Riemann hypothesis. Thereafter, the mathematicians tried to get rid of the assumption and it seemed quite a daunting task. In 1983, the pioneering attempt was made by R. Gupta and M. Ram Murty, who proved unconditionally that there exists a specific set of 13 distinct numbers such that for at least one of them, the conjecture is true. Along the same line, using sieve theory, D. R. Heath-Brown reduced this set down to 3 distinct primes in the year 1986. This is the best unconditional result we have so far. In the first part of this thesis, we will review the sieve theoretic approach taken by Gupta-Murty and Heath-Brown. The second half of the thesis will deal with the elliptic curve analogue of the Artin's conjecture, which is also known as the Lang-Trotter conjecture. Lang and Trotter proposed the elliptic curve analogue in 1977, including the higher rank version, and also proceeded to set up the mathematical formulation to prove the same. The analogue conjecture was proved by Gupta and Murty in the year 1986, assuming the generalized Riemann hypothesis, for curves with complex multiplication. They also proved the higher rank version of the same. We will discuss their proof in details, involving the sieve theoretic approach in the elliptic curve setup. Finally, I will conclude the thesis with a refinement proposed by Gupta and Murty to find out a finite set of points on the curve such that at least one satisfies the conjecture.