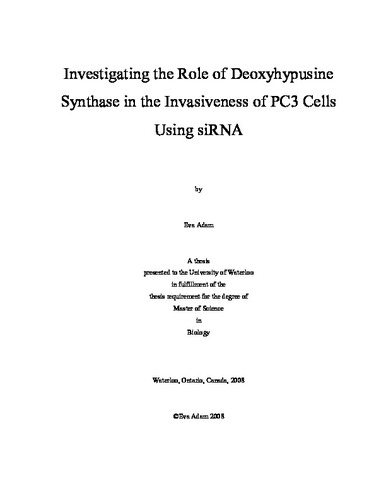 Deoxyhypusine synthase (DHS) catalyzes the first step in the hypusination of eukaryotic translation initiation factor 5A (eIF5A). In human cells, two eIF5A isoforms are present, eIF5A-1 and eIF5A-2, and DHS catalyzes the hypusination of both. Since both eIF5As are substrates for DHS, the biological functions of DHS are likely to be exerted through the various post-translational forms of these two eIF5As. The lysine form of eIF5A-1 has been associated with apoptosis, while the hypusinated form of eIF5A-1 has been associated with cell viability and proliferation. eIF5A-2 has been found to be over-expressed in certain cancers and has been proposed to function as an oncogene. Dhs is also over-expressed in certain human cancers and is a metastatic signature gene. The purpose of the present study was to investigate the role of DHS in cancer cell invasiveness, cell proliferation, and apoptosis using RNA interference. The main finding of the study is that DHS siRNA treatment decreases invasiveness of PC3 cells in vitro. Both DHS 0 siRNA treatment and DHS 1/b siRNA treatment significantly reduced cell invasiveness of PC3 cells as measured by the Matrigel invasion assay. Potential confounding variables, such as differences in cell proliferation or differences in apoptosis in response to DHS siRNA treatment, were assessed using the XTT cell proliferation assay and the Annexin V/Pi apoptosis assay, and they were found not to have an effect. In the absence of serum, DHS siRNA treatment did not result in significant decrease in cell proliferation compared to the control siRNA treatment. Furthermore, DHS siRNA treatment did not induce apoptosis in PC3 cells under the present experimental conditions. In conclusion, depletion of DHS with RNAi reduces invasiveness, but does not induce apoptosis in PC3 cells. The significance of the research is that the anti-invasiveness effect of DHS depletion in metastatic cancer cells is shown for the first time in the present study. Thus, DHS depletion may be useful to combat cancer in conjunction with L-eIF5A-1 over-expression.