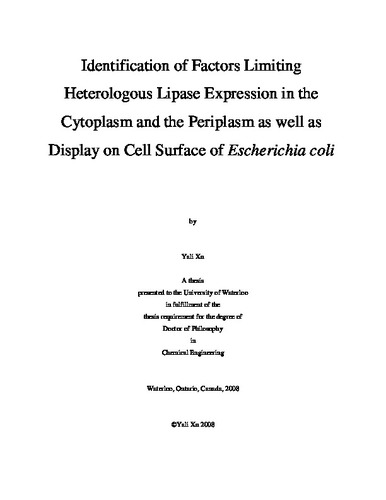 Lipase B from Pseudozyma antarctica (PalB), had been expressed in several recombinant protein hosts and showed very good transesterification activity for biodiesel production. However, the functional expression could not be demonstrated until recently in the most popular recombinant protein expression system, e.g. Escherichia coli, and the expression performance stands improvement. The probable reason is that PalB is a lipase with more hydrophobic surface and three disulfide bonds and thus may not be easily expressed in E. coli functionally. This thesis focuses on the identification of factors limiting heterologous expression of PalB in E. coli through a systematic study by using several strategies, including the different expression compartments, fusion tags, folding factors, and host strains. Functional expression of PalB in the cytoplasm of E. coli was explored using BL21(DE3) and its mutant derivative Origami B(DE3) as the host. Bioactive PalB was obtained in the reduced cytoplasm of BL21(DE3), implying that the formation of disulfide bond was not strictly required for functional expression. However, the expression was ineffective and was primarily limited by formation of PalB inclusion bodies and growth arrest, both of which were associated with PalB misfolding and deteriorated physiology. The culture performance in terms of cell growth and PalB expression level could be significantly improved by simultaneous coexpression of multiple chaperones of trigger factor and GroEL/ES, but not individual coexpression of either one of them. It was proposed that the two chaperones mediate the early stage and late stage of cytoplasmic PalB folding and would be required simultaneously for boosting both the overall PalB synthesis rate and the cytoplasmic folding efficiency. On the other hand, a much higher bioactive PalB was produced in Origami B(DE3) harboring the same PalB expression vector. Furthermore, the significant high bioactive PalB was produced by coexpression of periplasmic folding factor without a signal peptide (e.g., coexpression of DsbA, and DsbC). Coexpression of DsbA was found to be effective in enhancing PalB expression and such an improvement was more pronounced in Origami B(DE3), suggesting that both folding and disulfide bond formation could be the major factors limiting PalB expression. The fusion tag technique was also explored by constructing several PalB fusions for the evaluation of their expression performance. While the solubility was enhanced for most PalB fusions, only the DsbA tag was effective in boosting PalB activity possibly via both enhanced solubility and correct disulfide bond formation. Our results suggest that solubilization of PalB fusions did not necessarily result in the development of PalB activity which could be closely associated with correct disulfide bond formation. While PalB was stably expressed in the cytoplasm, most of the expressed gene product aggregated in cells as inactive inclusion bodies. In contrast, PalB was extremely unstable when expressed in the periplasm, also leading to poor expression performance. Such unstable PalB can be rescued by coexpression of several periplasmic folding factors, such as DegP, FkpA, DsbA, and DsbC, but not cytoplasmic chaperones. As a result, the performance for functional PalB expression in the periplasm was significantly improved. This is the first report demonstrating the use of folding factors to rescue the extremely unstable gene product that is otherwise completely degradable. On the other hand, functional expression of PalB in the periplasm was explored using four fusion tags, e.g., DsbC, DsbA, maltose binding protein (MBP), and FLAG in the sequence of increasing expression efficacy. Amongst these fusion tags for functional expression of PalB, FLAG and MBP appear to be the most effective ones in terms of boosting enzyme activity and enhancing solubility of gene products, respectively. Overexpression of these PalB fusions often resulted in concomitant formation of insoluble inclusion bodies. Coexpression of a selection of periplasmic folding factors, including DegP (and its mutant variant of DegPS210A), FkpA, DsbA, DsbC, and a cocktail of SurA, FkpA, DsbA, and DsbC, could improve the expression performance. Coexpression of DsbA appeared to be the most effective in reducing the formation of inclusion bodies for the four PalB fusions, implying that functional expression of PalB could be limited by initial bridging of disulfide bonds. Culture performance for functional expression of PalB was optimized by overexpressing FLAG-PalB with DsbA coexpression, resulting in a high volumetric PalB activity of 360 U/liter. Without extracting protein from cells the whole cell can be directly used as a platform for the immobilized enzyme. Proof-of-concept experimentation was conducted by PalB display on the E. coli cell surface. By fusing the palB gene in between the signal peptide phoA and an autotransporter Protein EstA’s gene under the lac promoter, PalB was successfully displayed on the E. coli cell surface. However, cells encountered a severe physiological stress. Coexpression of various periplasmic folding factors, e.g., DegP, SurA, DsbA and DsbC could erease the physiological stress, but only DsbA was demonstrated to be effective to restore cell physiology and increase PalB expression level. Key words: enzyme, Escherichia coli, chaperone, folding factor, fusion tag, gene expression, Pseudozyma antarctica, lipase B, recombinant protein production

Yali Xu (2008). Identification of Factors Limiting Heterologous Lipase Expression in the Cytoplasm and the Periplasm as well as Display on Cell Surface of Escherichia coli. UWSpace. http://hdl.handle.net/10012/3840