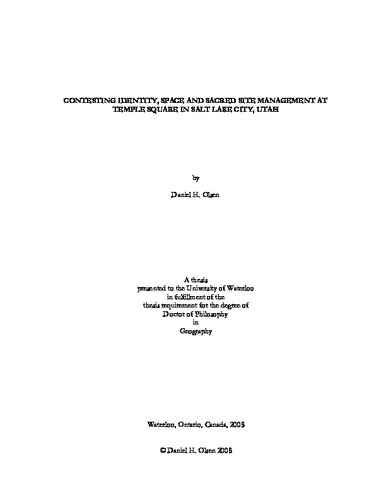 The purpose of my dissertation is to bring cultural geographic theory, including the ideas of representation, power, cultural and religious identity, and the contested and negotiated nature of places and identities, into discussions about the broader field of religious tourism. I use Temple Square in Salt Lake City, Utah, the spiritual centre of The Church of Jesus Christ of Latter-day Saints (also known as the Mormon or Latter-day Saint Church), as a case study to discuss and contest three theories related to religious tourism and sacred space that are prevalent in the academic literature. These include the contested space theory, where I argue that discussions about contested space must be set in the historical context and conditions under which conflict or contestation is first developed, and the pilgrim-tourist dichotomy, the utility of which I question in light of management strategies Latter-day Saint Church leaders use to destabilise identities at Temple Square. I also critique the view that religious sites lack sufficient managerial expertise to be run effectively by religious site managers. In doing this I argue that scholars and tourism industry officials need to take religious culture and history more seriously when attempting to understand how leaders of various religious faiths view tourism and how those views influence the management of their sacred sites.