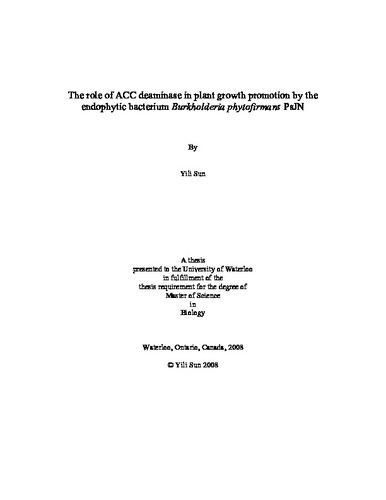 The endophytic bacterium Burkholderia phytofirmans PsJN has been previously shown to promote plant growth. This bacterium produces siderophores, indoleacetic acid (IAA) and the enzyme 1-aminocyclopropane-1-carboxylate (ACC) deaminase, all of which have previously been implicated in the promotion of plant growth by bacteria. Following isolation of the ACC deaminase gene (acdS), AcdS deficient mutants of PsJN were generated. One mutant contains a tetracycline resistance gene inserted into acdS, and the other mutant contains a deletion in the acdS gene. Both of the mutants showed no detectable ACC deaminase activity, produced a decreased level of siderophores and an increased amount of IAA compared to the wild-type, and lost the ability to promote canola root elongation. In addition, the GFP-labeled acdS deletion mutant colonized plant interior surfaces somewhat less efficiently than the GFP-labeled wild-type strain.