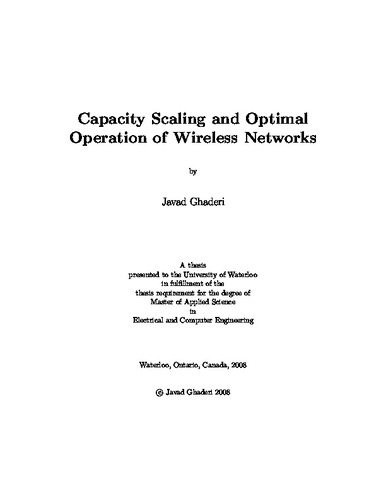 How much information can be transferred over a wireless network and what is the optimal strategy for the operation of such network? This thesis tries to answer some of these questions from an information theoretic approach. A model of wireless network is formulated to capture the main features of the wireless medium as well as topology of the network. The performance metrics are throughput and transport capacity. The throughput is the summation of all reliable communication rates for all source-destination pairs in the network. The transport capacity is a sum rate where each rate is weighted by the distance over which it is transported. Based on the network model, we study the scaling laws for the performance measures as the number of users in the network grows. First, we analyze the performance of multihop wireless network under different criteria for successful reception of packets at the receiver. Then, we consider the problem of information transfer without arbitrary assumptions on the operation of the network. We observe that there is a dichotomy between the cases of relatively high signal attenuation and low attenuation. Moreover, a fundamental relationship between the performance metrics and the total transmitted power of users is discovered. As a result, the optimality of multihop is demonstrated for some scenarios in high attenuation regime, and better strategies than multihop are proposed for the operation in the low attenuation regime. Then, we study the performance of a special class of networks, random networks, where the traffic is uniformly distributed inside the networks. For this special class, the upperbounds on the throughput are presented for both low and high attenuation cases. To achieve the presented upperbounds, a hierarchical cooperation scheme is analyzed and optimized by choosing the number of hierarchical stages and the corresponding cluster sizes that maximize the total throughput. In addition, to apply the hierarchical cooperation scheme to random networks, a clustering algorithm is developed, which divides the whole network into quadrilateral clusters, each with exactly the number of nodes required.