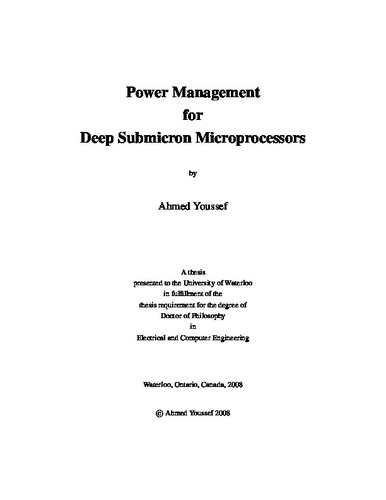 As VLSI technology scales, the enhanced performance of smaller transistors comes at the expense of increased power consumption. In addition to the dynamic power consumed by the circuits there is a tremendous increase in the leakage power consumption which is further exacerbated by the increasing operating temperatures. The total power consumption of modern processors is distributed between the processor core, memory and interconnects. In this research two novel power management techniques are presented targeting the functional units and the global interconnects. First, since most leakage control schemes for processor functional units are based on circuit level techniques, such schemes inherently lack information about the operational profile of higher-level components of the system. This is a barrier to the pivotal task of predicting standby time. Without this prediction, it is extremely difficult to assess the value of any leakage control scheme. Consequently, a methodology that can predict the standby time is highly beneficial in bridging the gap between the information available at the application level and the circuit implementations. In this work, a novel Dynamic Sleep Signal Generator (DSSG) is presented. It utilizes the usage traces extracted from cycle accurate simulations of benchmark programs to predict the long standby periods associated with the various functional units. The DSSG bases its decisions on the current and previous standby state of the functional units to accurately predict the length of the next standby period. The DSSG presents an alternative to Static Sleep Signal Generation (SSSG) based on static counters that trigger the generation of the sleep signal when the functional units idle for a prespecified number of cycles. The test results of the DSSG are obtained by the use of a modified RISC superscalar processor, implemented by SimpleScalar, the most widely accepted open source vehicle for architectural analysis. In addition, the results are further verified by a Simultaneous Multithreading simulator implemented by SMTSIM. Leakage saving results shows an increase of up to 146% in leakage savings using the DSSG versus the SSSG, with an accuracy of 60-80% for predicting long standby periods. Second, chip designers in their effort to achieve timing closure, have focused on achieving the lowest possible interconnect delay through buffer insertion and routing techniques. This approach, though, taxes the power budget of modern ICs, especially those intended for wireless applications. Also, in order to achieve more functionality, die sizes are constantly increasing. This trend is leading to an increase in the average global interconnect length which, in turn, requires more buffers to achieve timing closure. Unconstrained buffering is bound to adversely affect the overall chip performance, if the power consumption is added as a major performance metric. In fact, the number of global interconnect buffers is expected to reach hundreds of thousands to achieve an appropriate timing closure. To mitigate the impact of the power consumed by the interconnect buffers, a power-efficient multi-pin routing technique is proposed in this research. The problem is based on a graph representation of the routing possibilities, including buffer insertion and identifying the least power path between the interconnect source and set of sinks. The novel multi-pin routing technique is tested by applying it to the ISPD and IBM benchmarks to verify the accuracy, complexity, and solution quality. Results obtained indicate that an average power savings as high as 32% for the 130-nm technology is achieved with no impact on the maximum chip frequency.