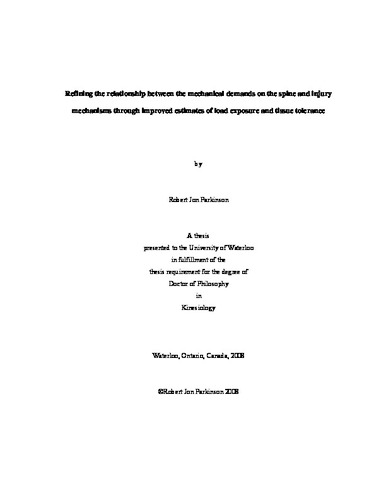 The low back loading to which an individual is exposed has been linked to injury and the reporting of low back pain. Despite extensive research on the spine and workplace loading exposures, statistics indicate that efforts to date have not led to large reductions in the reporting of these injuries. One possible cause for the apparent ineffectiveness of interventions may be a poorly defined understanding of the mechanical exposures of the spine during work related activities. There are sophisticated models that can predict spine loads and are responsive to how an individual moves and uses their muscles, however the models are complex and require extensive data collection to be implemented. This fact has prevented these models from being employed in industrial settings and the simplified surrogate methods that are being employed may not be predicting load exposures well. Therefore, this work focused on examining surrogate methods that can produce estimates of spine loading equal to our most complex laboratory based models. In addition, our understanding of spine tolerance to combined motion and load has been based upon in-vitro work that has not accurately represented coupled physiologic compression and flexion or has not investigated potentially beneficial loading scenarios. The result has been a lack of clear data indicating when motion should be treated as the primary influence in injury development or when load is the likely injury causing exposure. As a result, research was conducted to determine the interplay between load and motion in cumulative injury development, as well as investigating the potential of static rest periods in mitigating the effects of cumulative compression. Study one examined the potential utility of artificial neural networks as a data reduction approach in obtaining estimates of time-varying loads and moments equal in magnitude to those of EMG-assisted and rigid link models. It was found that the neural network approach under predicted peak force and moment exposures, but produced strong predictions of average and cumulative exposures. Therefore this method may be a viable approach to document cumulative loads in industrial settings. Study two compared the load and moment estimates from a currently employed, posture match based ergonomic assessment tool (3DMatch) to those obtained with an EMG-assisted model and those predicted with a rigid link modeling approach. The results indicated that 3DMatch over predicted peak moments and cumulative compression. However, simple correction approaches were developed which can adjust the predictions to obtain more physiologic estimates. Study three employed flexion/extension motion with repetitive compression loading profiles in an in-vitro study, with both load and motion profiles being obtained from measures in study 1. It was found that at loads above 30% of a spine’s compressive tolerance, repetitive flexion/extension would not lead to intervertebral disc injury prior to an endplate or vertebral fracture occurring. However, as loads fall below 30% the likelihood of experiencing a herniation increases, while the overall likelihood of an injury occurring decreases. Comparison to relevant studies indicated that while repetitive flexion did not alter the site of injury it appeared to degrade the ability of the spine to tolerate compression. Finally, study four employed dynamic compression while the spine was maintained in a neutral posture to investigate the effects of ‘rest’, or periods of static low level loading, on altering the amount of load tolerated prior to injury. It was found that there was a non-linear relationship between load magnitude and compressive tolerance, with increasing load magnitude exposures leading to decreasing cumulative load tolerances. Periods of low level static loading did not alter the resistance of the spinal unit to cumulative compression or impact the number of cycles tolerated to failure. In summary, this work has examined methods that may allow for better predictions of spine loading in the workplace without the large data demands of sophisticated laboratory approaches. Where possible, suggestions for optimal implementation of these surrogates have been developed. Additionally, in-vitro work has indicated a load threshold of 30%, above which herniation is not likely to occur during dynamic repetitive loading. Furthermore, the insertion of static rest periods into dynamic loading scenarios did not improve the spine’s failure tolerance to loading, indicating that care should be exercised when determining optimal loading paradigms. In combination, the applied methods that have been developed and the information regarding injury development that has been obtained will help to refine our understanding of the exposures and tolerances that define mechanical injury in the spine.

Robert Jon Parkinson (2008). Refining the relationship between the mechanical demands on the spine and injury mechanisms through improved estimates of load exposure and tissue tolerance. UWSpace. http://hdl.handle.net/10012/3818