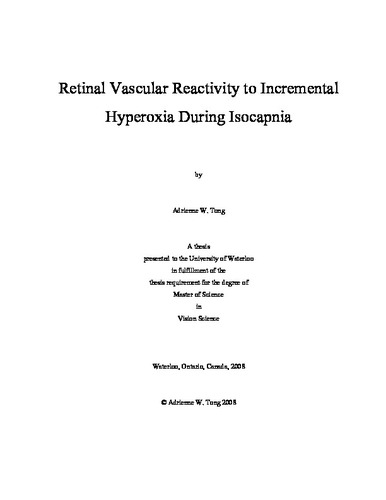 PURPOSE: Systemic hyperoxia has been induced using inspired gases in many studies to investigate vascular reactivity in the retinal vasculature. Technical limitations in the past resulted in inadequate control of systemic partial pressures of O2 and CO2, the latter of which tended to decrease secondary to induced hyperoxia. Recent development of a computerized gas delivery instrument has enabled the specific control of end-tidal CO2 (ETCO2) and fractional expired O2 (FeO2), independent of each other and of minute ventilation. The specific aims of each chapter are as follows: Chapter 3: To compare the magnitude and variability of the retinal vascular reactivity response to an isocapnic hyperoxic stimulus delivered using a manually-operated method to the newly developed computer-controlled gas sequencer. Chapter 4: To investigate the retinal hemodynamic response to incremental changes in hyperoxic stimuli during isocapnia. METHODS: Chapter 3: Ten young, healthy adults inhaled gases in a sequence of normoxic baseline, isocapnic hyperoxia, and normoxic recovery, using both gas delivery systems in random order. Chapter 4: Twelve healthy, young adults participated in a gas protocol consisting of 4 phases at varying fractional expired oxygen levels (FeO2): baseline (15%), hyperoxia I (40%), hyperoxia II (65%), and recovery (15%). End-tidal carbon dioxide (ETCO2) was maintained at an isocapnic level (~ 5%) throughout the experiment. In both Chapters 3 and 4, blood flow was derived from retinal arteriolar diameter and simultaneous blood velocity measurements of the superior temporal arteriole, acquired at 1-minute intervals during each of the phases of the gas protocol. RESULTS: Chapter 3: There was no interaction effect between the phases and gas delivery methods (p = 0.7718), but ETCO2 was significantly reduced during hyperoxia (p = 0.0002) for both methods. However, the magnitude of change in ETCO2 was physiologically insignificant i.e. <1%. The two systems differed in terms of FeO2 during hyperoxia, at a level of 85.27 ± 0.29% for the manual method, and 69.02 ± 2.84% for the computer method (p < 0.05). Despite this difference in oxygen concentrations, there was no difference in the vascular reactivity response for diameter (p = 0.7756), velocity (p = 0.1176), and flow (p = 0.1885) for equivalent gas phases between the two gas delivery systems. The inter-subject variability of retinal hemodynamic parameters was consistently lower using the computer-controlled gas sequencer. Chapter 4: Repeated measures ANOVA showed that there were significant influences of incremental changes in FeO2 on arteriolar diameter (p < 0.0001), blood velocity (p < 0.0001), and blood flow (p < 0.0001) in the retina. Paired t-tests of these retinal hemodynamic parameters during each phase in the gas sequence showed they were significantly different (p < 0.05) from each other, with the exception of baseline and recovery values. Incremental increases in FeO2 caused a linear decrease in group mean arteriolar diameter (R2 = 1, p = 0.002), group mean blood velocity (R2 = 0.9968, p = 0.04), and group mean blood flow (R2 = 0.9982, p= 0.03). CONCLUSIONS: Chapter 3: Inter-subject variability for virtually all retinal hemodynamic parameters was reduced using the computer-controlled method, presumably due to a higher degree of gas control. However, care needs to be exercised in the interprtetation of these results due to the relatively small sample size. A similar retinal hemodynamic response to isocapnic hyperoxia was induced using the two gas delivery systems, despite different levels of maximal FeO2. Chapter 4: Isocapnic hyperoxia elicits vasoconstriction and the reduction of retinal arteriolar blood flow in a dose-dependent manner over the range of FeO2 explored in this study.