Tourists' Awareness, Attitudes, and Perceptions of Wildlife Souvenirs: A Case Study in Cuba 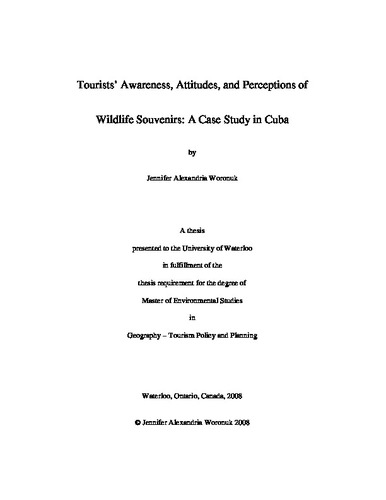 Considerable research has been conducted on tourist souvenirs but one area that has been widely neglected in souvenir literature is the concept of wildlife souvenirs. Many tourists purchase wildlife products when they go traveling, as evidenced by the continued production, sale, and confiscation of wildlife items such as coral/shell jewellery and animal skin/fur accessories around the world. Endangered species are often infiltrated into the souvenir trade and tourists both knowingly and unknowingly purchase endangered items as trip memorabilia. While the economic, environmental, and legal implications of the trade in wildlife have been well documented, the impacts of wildlife souvenirs have not; particularly the environmental consequences which are predominantly unknown. The purpose of this research was to assess tourists’ awareness, attitudes, and perceptions of wildlife souvenirs by exploring their purchase behaviour, general awareness, attitudes and perceptions, perception of environmental impact, and awareness of importation laws. A survey was conducted in the resort town of Varadero, Cuba in order to assess the frame of mind of international tourists (and potential souvenir consumers) while abroad. The findings revealed that there were significant differences in the way tourists identify with wildlife souvenirs and that these differences were occasionally attributed to sex and age but frequently attributed to geographic region (or place of origin). In general, tourists were found to be largely unaware of the concept of wildlife souvenirs and their implications, and fickle in terms of their attitudes and behaviours. A greater effort to educate the traveling public about the trade in wildlife and wildlife souvenirs would be a valuable strategy in enhancing overall awareness, promoting sustainable consumer practices, and conserving the world’s wildlife resources.