ON THE IMPLICATIONS OF VARIOUS APPROACHES TO GROUNDWATER SOURCE PROTECTION 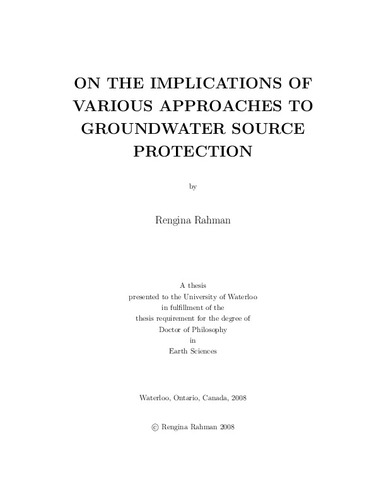 Protection of groundwater sources has become an important issue in Canada. Over the last decade many approaches to the protection of groundwater sources have evolved. Some approaches provide qualitative information while others give quantitative values with respect to protection measures. The objective of the thesis is to examine the existing approaches of source water protection (SWP) using a complex geological setting, and introduce new methodologies towards the quantitative measurement of the various steps of SWP. The information obtained from the studies can be used to set up future guidelines for SWP. The first step in SWP is to assess the vulnerability of an aquifer. In this thesis, we compare three approaches for evaluating aquifer vulnerability: the Index Approach (Intrinsic Susceptibility Index, or ISI), the Hydraulic Resistance (HR) Approach (similar to the Aquifer Vulnerability Index, or AVI) and the Travel Time Approach (Surface to Aquifer Advective Time, or SAAT). The ISI approach uses the thickness and vertical hydraulic conductivity of the layers overlying an aquifer, and the vulnerability is expressed as a numerical score which is related to these parameters but is not physically based. The HR approach is physically based, uses the same parameters as ISI with the addition of porosity, and results are in the form of travel time under a unit gradient. SAAT extends the physically based approach by including the unsaturated zone and using the actual downward gradient; results are given in terms of advective travel time from surface to aquifer. These three approaches are compared, using two different aquifer systems. The second step in SWP is the delineation of wellhead protection areas (WHPAs). The WHPA delineates the area within which a source of contamination could have an impact on the well. The actual impact on the well depends not only on the source, but also on the characteristics of the groundwater system. Important considerations include the dimensionality of the system, the uncertainty in the system characteristics, and the physical processes that could affect the impact. The conventional approach is to define different time of travel (TOT) zones based on backward advective particle tracking. An alternative approach is to apply backward advective-dispersive solute transport modelling, in which dispersion can be taken as representing the uncertainty in defining the hydrogeologic characteristics (e.g. hydraulic conductivity) of the aquifer. The outlines of the TOT zones in the backward advective particle tracking approach is obtained by drawing an envelope around the respective tracks, which may require considerable guesswork. In the backward-in-time transport modelling, the outline of the TOT zones are developed using mass balance principles. The third step is the assessment of well vulnerability. Well vulnerability is based on the source-pathway-receptor concept which analyses the transport and fate of the contaminants along its path from the source to the receptor, and the interaction of the well itself with the flow system, and thus determines the actual impact on the well. The impact can be expressed in terms of the contaminant concentration in the well water. The mapping of the impact can be carried out by using a standard advective-dispersive transport model in either a forward-in-time mode (for a known contaminant source) or in a backward-in-time mode (for unknown sources). Thus, the well vulnerability concept goes beyond the conventional approach of WHPA, which is based solely on advective transport, neglecting dispersion and chemical processes. For any known point or non-point time-varying contaminant sources located arbitrarily within the well capture zone, the expected concentration at the well can simply be evaluated by convoluting the source mass with the results of the well vulnerability without further use of the model. Convolution is a well-known and effective superposition method to deal with arbitrary inputs in time and space for linear systems. The information of the contaminant concentration in the well water can be used to quantify the risk of a well becoming contaminated. Risk can be expressed in terms of the exposure value of the contaminant concentration exceeding the allowable limit and the time frame within which the well becomes contaminated. The exposure value can be integrated with the time element to set up a ranking of priorities, or to calculate the investment that must be made today in order to have the required funds available for remediation at the time it becomes necessary. The concept is applied to a well using hypothetical contaminant sources located arbitrarily within the capture zone. Well vulnerability maps can be used as a powerful tool to identify the optimal locations for Beneficial Management Practices (BMPs). A case study addressing the problem of elevated nitrate levels in a drinking water supply well is used to demonstrate the principle. The reduction of nitrate input concentration within the most vulnerable areas shows the largest impact at the well.