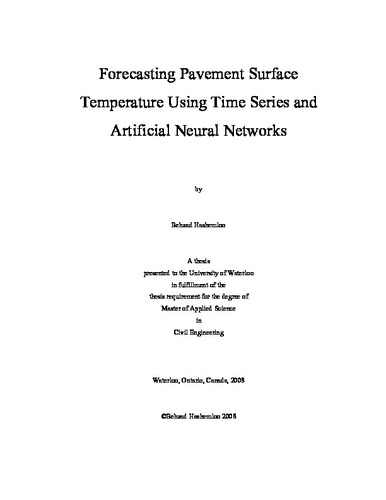 Transportation networks play a significant role in the economy of Canadians during winter seasons; thus, maintaining a safe and economic flow of traffic on Canadian roads is crucial. Winter contaminants such as freezing rain, snow, and ice cause reduced friction between vehicle tires and pavement and thus increased accident-risk and decreased road capacity. The formation of ice and frost caused by snowfall and wind chill makes driving a very difficult task. Pavement surface temperature is an important indicator for road authorities when they are deciding the optimal time to apply anti-icer/deicer chemicals and when estimating their effect and the optimal amounts to apply. By forecasting pavement temperature, maintenance crews can figure out road surface conditions ahead of time and start their operations in a timely manner, thereby reducing salt use and increasing the safety and security of road users by eliminating accidents caused by slipperiness. This research investigates the feasibility of applying simple statistical models for forecasting road surface temperatures at locations where RWIS data are available. Two commonly used modeling techniques were considered: time-series analysis and artificial neural networks (ANN). A data set from an RWIS station is used for model calibration and validation. The analysis indicates that multi-variable SARIMA is the most competitive technique and has the lowest number of forecasting errors.