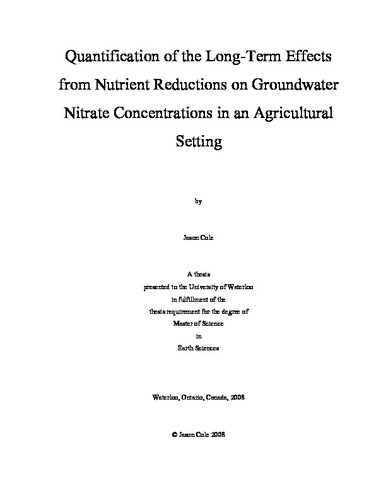 The Ontario Nutrient Management Act (2002) recommends agricultural Beneficial Management Practices (BMPs) that involve reductions in nutrient applications of nitrogen (N) to fields to improve underlying groundwater quality, but little is known regarding how to best evaluate their success, and how quickly and to what extent groundwater quality will be improved. This study focuses on a 54 ha hog farm located on the southern flank of the Oak Ridges Moraine near Port Hope, Ontario, where, beginning in 1997, the farm operator reduced nutrient application of N by 46% (from 286 kg-N/ha to 153 kg-N/ha). This site provided a unique opportunity to study the long-term effects of reducing nutrient loading of N because of the availability of historical groundwater quality data and records of yearly, field-by-field applications of N (as liquid swine manure and commercial fertilizers such as urea and ammonium sulphate), crop types (corn and soybeans), and crop yields. The objective of this study was to determine how the reduction in nutrients has altered the nitrate loading to the subsurface and its effect on groundwater quality. It was hypothesized that analysis of unsaturated zone soil and the shallow groundwater following 10 years of nutrient reductions should provide insight into the long-term effects of BMPs. A multifaceted characterization of the site was undertaken that included yearly N-budget calculations for four individual fields on the farm to determine the potentially leachable N and the hydrogeological characterization of flow and transport of N through the unsaturated zone and underlying groundwater. Field investigations included: installation of new monitoring wells (9); datalogging of water levels (12 wells); water quality monitoring (32 wells); multiple soil coring events; analysis of nitrate isotopes for characterization of N sources in soil and groundwater using 15N and 18O isotopic ratios; bromide tracer tests (3 sites); soil moisture profiles measured in 5 neutron access tubes; and installation of a meteorological station. Investigations focused on a surficial aquitard unit, which was a ~10 m thick, stony, sandy, silty, till (Newmarket Till), and an underlying aquifer unit, which was a ~7m thick, semi-confined sand and gravel aquifer. These two units make up the local flow system at the site and are underlain by another aquitard and a deeper aquifer. The study concentrated on Field B where the 1997 change in nutrient application coincided with a change from swine manure to commercial fertilizer, and the area upgradient of it. This change meant that the isotopic signature of the nitrate could be used as an additional “tracer” to distinguish “BMP applied N” from previous or upgradient applications. A comparison between 1997 and present groundwater nitrate concentrations in the shallow aquifer and aquitard show that farm wide concentrations have decreased by an average of 35% from an average of ~32 mg/L to and average of ~21 mg/L. The most significant improvements were observed in wells screened at or near the watertable, where concentrations below 10 mg/L were observed. The recharge rate was estimated from bromide tracer tests and water balance calculations to be 160 mm/yr, which suggests that water infiltrating in 1997 should have reached the watertable (~6 m deep) prior to the start of this study in 2005. Isotopic values 15N and 18O in NO3- further confirm this result. Estimations of the groundwater nitrate concentrations from N-budget calculations provided reasonable estimates of changes in groundwater quality over time, but were very sensitive to site-specific groundwater recharge rates. Nitrate loading beneath the site were estimated to have decreased by 43% since 1997. This decrease in nitrate loading has significantly decreased the concentration of nitrate exiting the farm property. These results suggest that historical applications of N likely exceeded crop nutrient requirements and therefore a reduction in N applications to the land surface have the capacity to reduce nitrate loading to the groundwater. To date, crop yields have not been significantly altered from the changes in land-use practices. If N application rates at the Allin Farm are maintained, it is likely that further improvements will be observed in the groundwater, although the full extent of these improvements may not be observed for many years. The fact that the improvements in groundwater nitrate concentrations can be achieved at a local scale within a larger flow system may provide encouragement for more widespread adoption of agricultural BMPs.

Jason Cole (2008). Quantification of the Long-Term Effects from Nutrient Reductions on Groundwater Nitrate Concentrations in an Agricultural Setting. UWSpace. http://hdl.handle.net/10012/3787