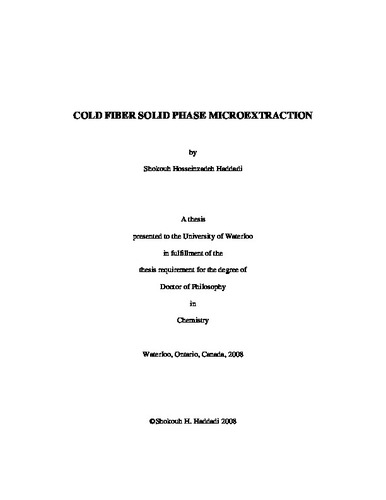 A cold fiber solid phase microextraction device was designed and constructed based on the use of a thermoelectric cooler (TEC). A three-stage thermoelectric cooler was used for cooling a copper rod coated with a polydimethylsiloxane (PDMS) hollow fiber, which served as the SPME fiber. The copper rod was mounted on a commercial SPME plunger and exposed to the cold surface of the TEC, which was enclosed in a small aluminum box. A heat sink and a fan dissipated the generated heat at the hot side of the TEC. By applying an appropriate DC voltage to the TEC, the upper part of the copper rod, which was in contact to the cold side of the TEC, was cooled and the hollow fiber reached a lower temperature through heat transfer. A thermocouple was embedded in the cold side of the TEC for indirect measurement of the fiber temperature. A portable cold fiber SPME device was made by using a car battery as the power supply. The cold fiber SPME device with thermoelectric cooling was applied in quantitative analysis of off-flavors in rice. Hexanal, nonanal, and undecanal were chosen as three test analytes in rice. These analytes were identified according to their retention times and analyzed with a GC/FID instrument. Headspace extraction conditions (i.e. extraction temperature and extraction time) were optimized. Standard addition calibration graphs were obtained at the optimized conditions and the concentrations of the three analytes were calculated. The developed method was compared to a conventional solvent extraction method. The applicability of the portable cold fiber SPME with TEC for field sampling was tested. The effect of cooling on extraction recovery and the reproducibility of extraction were examined for extractions from an n-alkane flow through system. It was found that the extraction recoveries were significantly higher when the fiber was cooled. To further investigate the effect of cooling on the sensitivity of SPME in field sampling, the portable cold fiber SPME was used for extraction of volatile components from living wisteria flowers. Both the number of identified compounds and the related peak areas increased for extractions with cold PDMS fiber relative to without cooling and commercial PDMS and PA fibers. The portable cold fiber SPME device was also used for field sampling of volatile components of living lily-of-the-valley flowers and the extracted compounds were analyzed with GC/MS. The desorption kinetics of hydrophobic organic compounds (HOCs) from environmental solid matrices was investigated using cold fiber SPME with CO2 cooling. Polycyclic aromatic hydrocarbons (PAHs) and selected volatile organic compounds (i.e. toluene, ethylbenzene, o-xylene) were used as test analytes. Sand, silica gel, and clay were used as laboratory model solid matrices and were contaminated by the test analytes. Certified sediments were used as naturally contaminated samples. In this approach, the organic compounds, released from contaminated solid samples at different elevated temperatures, were exhaustively extracted with cold fiber SPME over different extraction times. The extraction data were used to obtain desorption and Arrhenius plots. The rate constants of desorption and activation energies of desorption were measured for each contaminant using these plots. The results were comparable to those reported in the literature.